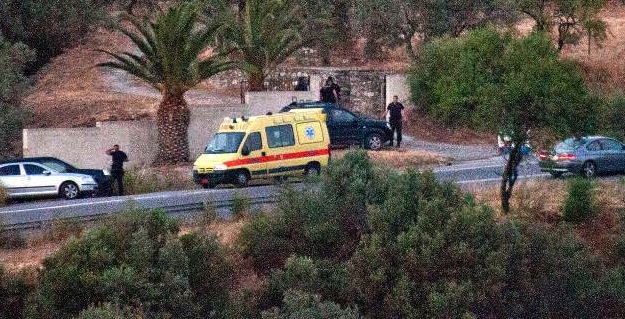 In a sensational new turn in the case, police on Saturday reported that the suspect killed during a counter-terrorism operation at Nea Aghialos in Volos was none other than the pilot of the helicopter in which notorious criminal Vassilis Paleokostas had in 2006 escaped from Korydallos Prison in Athens, Greece .
During the preliminary inquiry conducted by the counter-terrorism squad, the dead man was positively identified as 34-year-old Spiros Dravilas, also known by the nickname ‘Karfakias,’ who was also implicated in an armed robbery carried out in Distomo last August.
Police arrested two individuals during Friday’s operation, 44-year-old Spiros Christodoulou and 37-year-old Grigoris Tsironis. The latter arrest was considered especially fortunate, since Tsironis has been wanted for years as one of the ‘robbers in black’ that worked with the brothers Marios and Simos Seisidis. Along with the brothers, police had offered a 600,000-euro reward for Tsironis after an attack on the Agia Paraskevi police station using Kalashnikov rifles.
According to information given by authorities, four shots were heard from within the house during the police operation at Aghialos, before police had entered. The two suspects in custody then surrendered, claiming that the third suspect shot himself to avoid arrest.
Tsironis initially identified himself as Spiros Dravilas, causing confusion concerning the identity of the dead man. This was later definitively settled when the dead man’s finger prints revealed his true identity. The two men under arrest are to be led before a public prosecutor on Saturday afternoon.
In a press conference, Chief of Police Dimitris Tsaknakis confirmed that Dravilas committed suicide, shooting himself in the head after he realized the police had surrounded the house in Nea Aghialos. The police operation was mounted after the counter-terrorism squad uncovered information indicating that Vassilis Paleokostas may be involved in two serious armed robberies recently carried out in Thessaly. Police said that the dead man, Dravilas, and 45-year-old Spiros Christodoulou were both at the Distomo robbery in August with Giorgos Petrakakos, who is wanted and still at large.
The three were uncovered after authorities spotted Dravilas driving a Nissan truck that had earlier been used in an armed robbery in Ambelonas, Larissa outside a supermarket in Volos. Police set up a surveillance operation, followed the truck back to the house in Nea Aghialos and soon after decided to move in.
A search of the house has revealed additional evidence, such as fire arms, ammunition and three stolen cars. All three men are believed to have participated in a robbery at Farkadona, Trikala on April 2 and the robbery in Ambelonas, Larissa on April 30.
Asked whether any of the three are linked to terrorism in any way, Tsaknakis said there was no evidence to confirm this, apart from the fact that convicted terrorist Nikos Maziotis had taken part in robberies committed by the gang in the past.
(source: ana-mpa)

The May Day Wreath and Its Roots in Ancient Greece