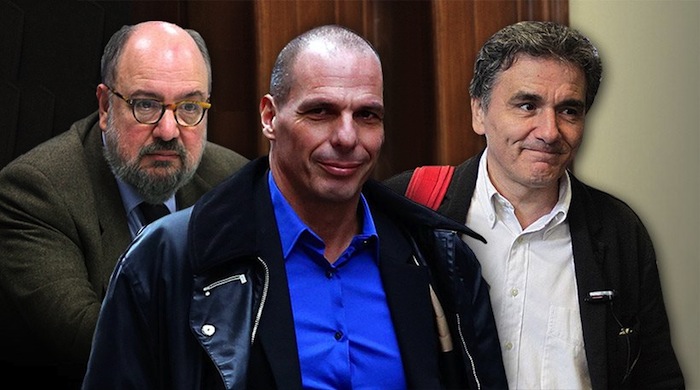 Despite his expressed trust to Finance Minister Yanis Varoufakis, Greek Prime Minister Alexis Tsipras proceeded with forming a new political negotiating team putting Varoufakis at the helm but appointing Alternate Foreign Minister for International Economic Relations Euclides Tsakalotos as coordinator of the group.
The setting up of a political negotiating group was decided on Sunday at a meeting at the Maximos Mansion, chaired by Tsipras. General Secretary of the Greek Government Spyros Sagias and General Secretary of Fiscal Policy Nikos Theocharakis complete the group. The latter was appointed to draft a plan for growth of the Greek economy. The plan will be the basis of negotiations for the June agreement, when the bailout program extension expires.
Government Vice President and responsible for the government’s council of economic policy Yiannis Dragasakis, Economy Minister George Stathakis, State Minister Nikos Pappas also participated in the meeting.

Analysts say that Tsipras took the decision after the finance minister was harshly criticized for his appearance during Friday’s Eurogroup in Riga. Tsakalotos, on the other hand, is more liked by lenders’ representatives and he will play a better role in face-to-face negotiations.

Another move suggesting that Varoufakis will have a less prominent role in negotiations, is the fact that the drafting of the new economic plan has been given to Theocharakis, who had been leading technical-level talks with creditors’ representatives.

Giorgos Chouliarakis, considered close to the powerful Dragasakis, will take over responsibility for talks with the Brussels group, as Athens prefers to call the lenders’ representatives. A new technical team has also been set up to support European Union and International Monetary Fund officials gathering information in the Greek capital.