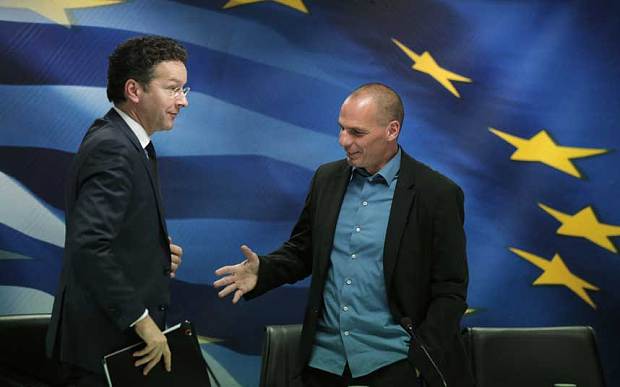 Greece’s outspoken Finance Minister Yanis Varoufakis, who has reportedly faced a hostile environment in today’s Eurogroup in Riga, Latvia, said Athens is now ready to make “big compromises.” According to a Bloomberg report, Varoufakis was referred to as a “time-waster, a gambler and an amateur” by one of his European counterparts.

“We have agreed that we are going to speed up negotiations, that we will take another look at the processes,” Varoufakis reportedly said, suggesting that the technical teams may not need to meet both in Brussels and Athens. “You can choose to look at it as a half full or half empty bottle. We choose the optimistic way… The two sides have come much closer on issues like privatizations… The government has proposed to set up an independent tax commission… We have had very good discussions on the need to reform the judiciary,” the Greek Finance Minister explained, as cited by Reuters. Moreover, Varoufakis suggested that the negotiation process would be sped up if creditors could agree to a “partial disbursement” in return for a “narrower list of reforms.”

On his behalf, though, Eurogroup President Jeroen Dijsselbloem said the critical discussion on the Greek issue left the group “still far from where we wanted to be.” He reiterated that Athens must come to a comprehensive agreement with creditors before any bailout funds are disbursed.

Stefanos Tsitsipas Gets His Own Adidas Shoe; Another First for Greek Tennis!