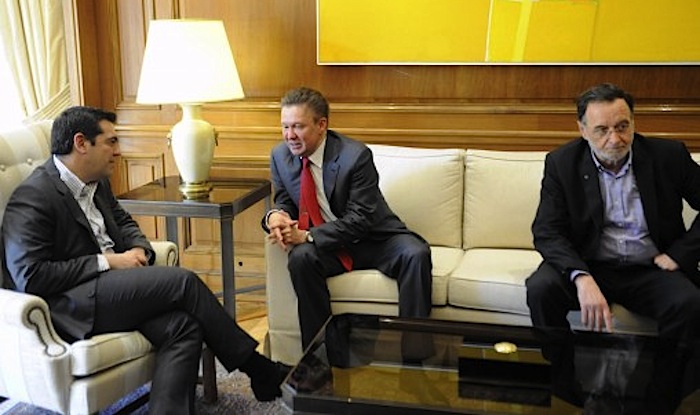 Colossal Russian energy company Gazprom chief Alexei Miller said his country guarantees annual supplies of up to 47 billion cubic meters of natural gas to Central Europe through transit infrastructure to be constructed in Greece. “The Greek government is supporting the project involving construction of gas transit infrastructure from the border with Turkey, which could be implemented by a Russian-European consortium,” Miller told reporters following a meeting with the Greek Prime Minister Alexis Tsipras earlier today.

“The Russian side, Gazprom, guarantees that up to 47 billion cubic meters of natural gas will be transported through the Greek territory. There is no doubt that the Russian-European consortium will be able to attract the two billion euros in financing necessary to build this infrastructure,” the Russian company CEO explained, adding that the pipeline will be implemented in strict accordance with European law.

On his behalf, Greek Energy Minister Panagiotis Lafazanis expressed the certainty that Moscow and Athens will soon sign an agreement on gas pipeline cooperation. “No agreements were signed today… Russia and Greece will sign an agreement on the pipeline construction soon,” Lafazanis said. Moreover, as the Energy Minister noted, the talks with the company’s chief were constructive, adding that “Greece is interested in building the pipeline because it will benefit a lot from it.”

it should be noted that on April 8, during Tsipras’ official visit to Moscow, Russian President Vladimir Putin underlined that the Turkish Stream pipeline could help Greece become one of the main power distribution centers in Europe and attract serious investments.

The ambitious pipeline project will start at the Russkaya compressor station near Anapa in southwest Russia, while the landing point in Turkey has not been negotiated yet. According to Gazprom, the works will immediately start when the landing point in Turkey is decided and for that reason two pipe-laying ships are already located in the Black Sea. The pipeline’s planned capacity of natural gas is 63 billion cubic meters per year. Turkey would take about 14 billion cubic metres per annum and the rest will be distributed to Europe.