GRNews
GreekReporter.comGreeceUnique Easter Traditions That Revive in Greece Each Year

Unique Easter Traditions That Revive in Greece Each Year 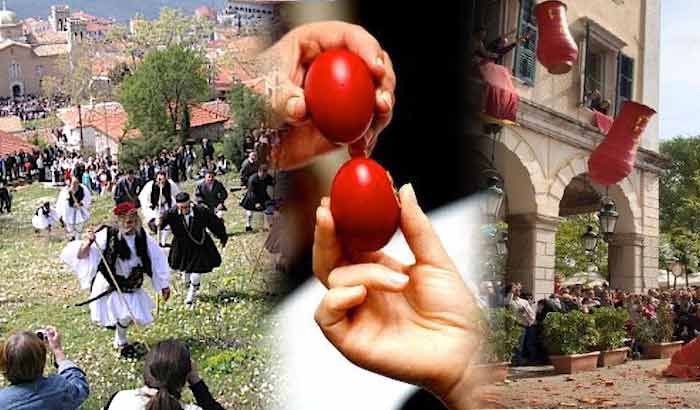 Easter is celebrated in highly devout atmosphere, across every corner of Greece. It is a glorious day for Greeks since the resurrection of Christ coincides with the most beautiful phase of spring. Flowers are blooming, the trees are greener than ever and every part of nature appears to be celebrating along with the people.
Each Greek city and village celebrates the day in a different manner. In Leonidio, Peloponnese, for more than a century, locals have been reviving the same tradition. At the stroke of midnight on Easter Sunday, the sky lights up by hundreds of homemade hot air balloons that offer a breathtaking spectacle as they rise over the horizon. The balloons, handmade by locals, fly in the air for 30 to 40 minutes before burning out or disappearing over the horizon.
On the Greek island of Corfu, locals revive the old tradition of “botides” (a special type of clay pots). On the morning of Holy Saturday after the First Resurrection, which takes place in the island’s Metropolitan church, the bells of all the churches toll and people start throwing thousands of botides filled with water and laurel from their windows. The botides crash on the road with a loud bang, which in combination with the water and laurel is supposed to scare “evil” away. Furthermore, the day is filled with music from the island’s numerous bands that march around the city center playing joyous songs.
Furthermore, in Thrace, northern Greece, a Judas Iscariot effigy is paraded by children in the streets, asking locals for branches so they can burn him. On Holy Friday, the procession of the Epitaph stops outside a chapel, where the fire is ready to burn Judas. Once the priest starts reading the Gospel, they light the fire and burn the effigy. Later, they take a handful of the ashes and scatter them in the graveyard.
In the Greek village of Arachova, locals celebrate Easter, as well as St. George’s name day, which traditionally falls near Easter. On Easter Sunday, a procession of St. George’s icon starts at the village and travels uphill to St. George Church. Over 3000 villagers dressed in colourful local dresses follow St. George’s icon while dancing groups entertain the crowd. At the same time, they have already prepared pits lit with fire from the resurrection candles and they roast a lamb over the fire.
In Kalamata, the saitopolemos is a custom that has survived for many years. It stems from the 1821 War of Independence and specifically from a battle the Greeks fought against the army of Ibrahim Pasha. The participants are divided into 10 to 15 teams, each team consisting of 15 to 30 people, mainly young boys dressed in traditional costumes and armed with saites -cardboard tubes filled with gunpowder. The custom is controversial because it is very dangerous.
On the Greek island of Chios, locals have a dangerous but spectacular Easter tradition. Apart from the egg cracking and conventional fireworks, a rocket war takes place between two local churches during the Resurrection mass on Holy Saturday night. The “Rouketopolemos,” or the Rocket War, is a tradition that has been around for many years, since the Ottoman occupation.