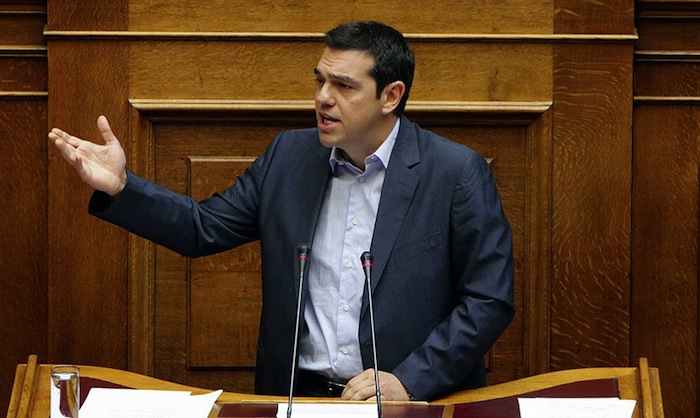 The Greek Parliament concluded a vote Tuesday early morning with the passing of the SYRIZA government’s proposal for an investigative committee to look into the circumstances surrounding the signing of the country’s two memoranda with its international lenders. Out of the 300 Greek MPs, 156 voted in favor of establishing the committee.
Before the vote, there was a long debate in which all party leaders spoke at the Greek parliament.
SYRIZA leader and Greek Prime Minister Alexis Tsipras said that his government is “seeking clear answers on how Greece signed these international agreements.”
“Greece is not a liegeman whose lenders can play games on its back,” notes PM Tsipras.
Minority leader and former PM Antonis Samaras whose New Democracy party opposed the establishment of the investigative committee said “now it’s not the right time” and that he would have agreed to the investigation if Greece had already come to an agreement with its lenders.
“The committee will examine Greece’s inclusion in the status of memoranda and surveillance as well as any other matter related to the agreements’ implementation,” SYRIZA Parliamentary Secretary Christos Mantas had explained earlier.
“We are fulfilling our commitment and the social demand, with no intention of revanchism nor criminalization of the political life in order to explore the causes and responsibilities of an unprecedented crisis that devastated the vast majority of society,” Mantas added.
On May 2, 2010, the so called “troika,” responded to the Greek crisis by launching a bailout loan to rescue the country from default and cover its financial needs under the condition of implementing austerity measures, structural reforms and privatization of government assets. The second bailout program activated in February 2012, extended the first program, meaning a total of another 240 billion euros were to be transferred at regular tranches between May 2010 and December 2014.