GRNews
GreekReporter.comGreek NewsEconomyVaroufakis after Lagarde Meeting: 'Greece Will Pay All Creditors Including IMF'

Varoufakis after Lagarde Meeting: 'Greece Will Pay All Creditors Including IMF' 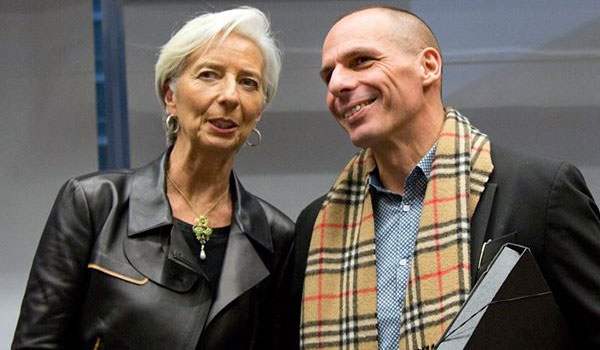 Greek Finance Minister Yanis Varoufakis said Greece will pay all its creditors, including the upcoming International Monetary Fund loan repayment, as he was exiting a meeting with IMF managing director Cristine Lagarde in Washington, DC on Sunday April 5.
Greece faces a deadline to repay a €450m loan to the International Monetary Fund on April 9th, and many sources had speculated that the crisis-hit country won’t be able to pay the installment.
“Greece was a founding member of Bretton Woods institutions,” the Greek Finance Chief noted to reporters outside the IMF.
Christine Lagarde made the following statement after the meeting: “Minister Varoufakis and I exchanged views on current developments and we both agreed that effective cooperation is in everyone’s interest. We noted that continuing uncertainty is not in Greece’s interest and I welcomed confirmation by the Minister that payment owing to the Fund would be forthcoming on April 9th.”
“I expressed my appreciation for the Minister’s commitment to improve the technical teams’ ability to work with the authorities to conduct the necessary due diligence in Athens, and to enhance the policy discussions with the teams in Brussels, both of which will resume promptly on Monday. I reiterated that the Fund remains committed to work together with the authorities to help Greece return to a sustainable path of growth and employment.”
The Greek finance minister traveled to Washington, DC to hold an informal discussion on the Greek government’s reform program with the IMF’s managing director, Christine Lagarde. The Varoufakis-Lagarde meeting started at 6.15 pm on Sunday and lasted for two hours.
The Greek Finance minister is also scheduled to meet with President Obama’s top economic and national security adviser Caroline Atkinson on Monday.