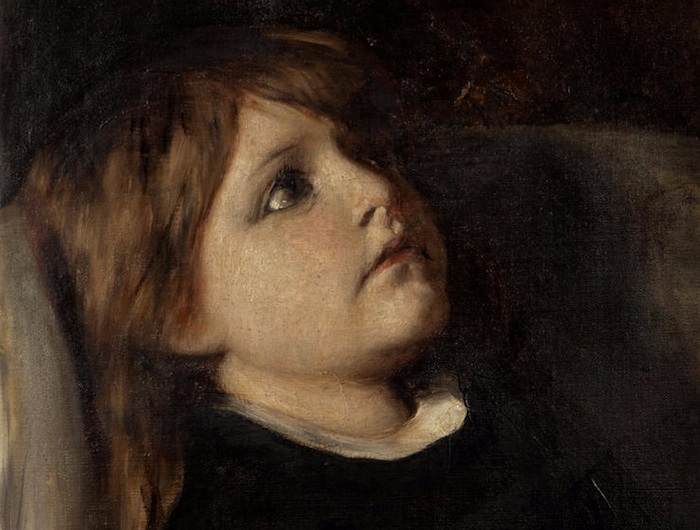 Painted in 1882, the work, entitled Little girl, the artist’s daughter, dates from one of the artist’s most creative periods. Penelope, in whose face one observer discerned a noble Greek countenance, is painted with great love and affection as well as consummate skill. It is generally acknowledged that this and other portrayals of his family count among Gysis’ best work. Another of his portraits, Young girl with headscarf, (£25,000-35,000) is also featured in the sale. This insightful painting shows no sign of idealization and the unadorned beauty of the depiction conveys honesty of representation, genuineness of character and purity of form.

The sale features several high quality 19th and early 20th century works including the delightful and atmospheric Old Mill in Hydra (£40,000-60,000) by Michalis Economou (1888-1933). During the last years of his life Economou spent the summer months on Hydra and his exquisite views of the island count among the best of his mature works. It has been said of his Hydra paintings, “He didn’t copy nor stage what he saw; instead, he conveyed everything that could express this historic Greek rock.” The same artist’s House and mill (20,000-30,000) painted on the coast near Marseilles while he was living and working in France in the 1920s shows his abiding fascination with water and the ocean.

The Greek love of the sea is also found in two very different works by other 19th artists. Shore Scene (£20,000-30,000) by Vassilios Hatzis (1870-1915) shows a fisherman looking out to sea from his boat. In contrast, Junction in choppy seas (£20,000-30,000) by the short-lived but brilliant Jean Altamoura (1852-1878) shows an assurance of technique rarely found in so young an artist. In 1875, while studying on a state scholarship at the Academy of Fine Art in Copenhagen, Altamoura spent the summer on the Royal Danish Naval frigate ‘Jylland’ and this work dates from that period.

“All the main movements in Greek Art from the 19th century to the present day are represented in this sale with high quality works that showcase the breadth of subject, technique and style of the nation’s artistic heritage,” said Bonhams Greek Art specialist Olympia Pappa.

For a full listing of the Bonhams Greek Art sale please visit bonhams.com.