Argyris Sfoundouris: The Man Who Reminded Germany the Nazi Crimes at Distomo 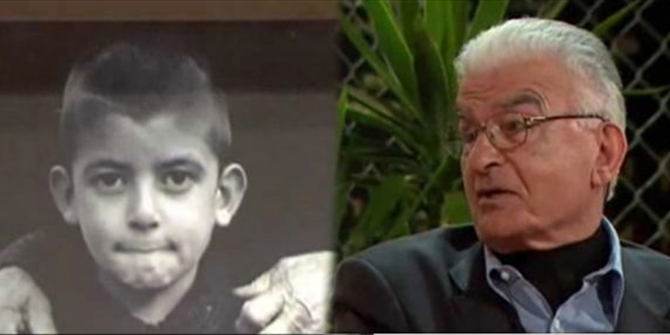 Argyris Sfoundouris was only four years old on June 10, 1944. He was playing with his three sisters in his home in Distomo, in central Greece, when suddenly some men in uniform broke down the door, dragged his parents out in the yard and shot them to death.
The men were an SS battalion who entered the village that summer day and started executing indiscriminately men, women and children, 218 in all.
Little Argyris and his sisters were lucky to survive the massacre by the Nazis. Thirty members of their family were killed that day, including their parents.
The four kids ended up in an orphanage in Piraeus. Due to his fragile health, Argyris was transferred to a smaller one in Ekali. Then, about four years later, he ended up at the Pestalozzi Children’s Village in Trogen in Switzerland where he grew up and went to school. Then he studied mathematics, nuclear physics and astrophysics at the Swiss Federal Institute of Technology in Zurich (ETHZ).
In 1994, on the fiftieth anniversary of the tragic event at Distomo, Argyris Sfoundouris organized “Peace Conference” at the European Cultural Center in Delphi. In 1995, along with his sisters, he took legal action against Germany for the massacre of his family and his fellow villagers.
Sfoundouris’ action to ask for compensation by the German government was followed by 290 relatives and descendants of Distomo victims, starting an ongoing legal, and moral, battle.
Today Argyris is 75 years old and hasn’t given up the cause. He knows he is morally right and continues the struggle.
A few days ago German public television show “Die Anstalt”, highlighted the issue of German atrocities and the moral responsibility of the German government to compensate the Distomo victims’ families for the crimes committed by the Nazis. His appearance at the end, juxtaposed with the black and white picture of the 4-year-old boy, made some members of the audience cry.
The satirical show started with a Greek tavern owner depicting Greece and three men representing the troika of international lenders. The sketch presents the absurdity of the arguments the three men use in favor of austerity.
Then the sketch turns to the issue of the war reparations and the weakness in the arguments from the German side. With humorous and concise examples, the writers of the show make a case in favor of the Greek requests, at least on moral grounds. Argyris Sfoundouris is the living proof of the Distomo massacre and Greece’s righteous request.
“I feel vindicated, but I’m also surprised by the ardent interest by major European media for the war crimes in Distomo and German compensation. In the past week I have given as many interviews as I have given in the two decades I struggle,” the massacre survivor told Eleftheros Typos newspaper.
Speaking of the ZDF show he appeared on, Sfoundouris said: “The guys did a great job. They did the research on their own and it is absolutely faithful to reality. I did not expect such a reception by the German public, which actually paid to come and spontaneously applauded when I appeared. At the end I had to bow three times after all the hot and loud applause. I was really touched.”
“I won’t stop the fight until justice is done. It is time for Germany to stop claiming ignorance and branding “war measure” a crime against humanity,” Sfoundouris said. Finally, when asked what Germany should do, the lucky massacre survivor replied quoting Greece’s lenders on the sketch: “Rules are rules; debts must be paid off, no tricks.”
Watch video here: