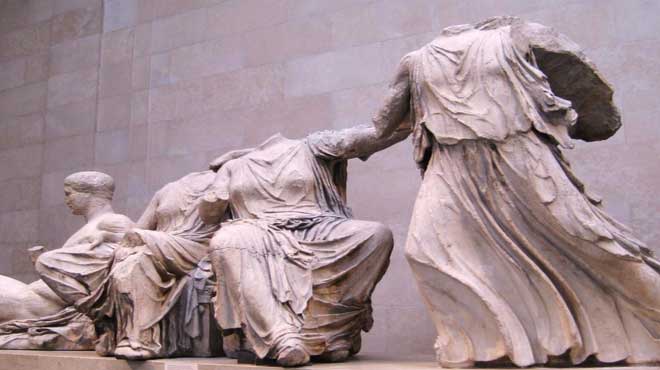 The Greek government’s request for the Parthenon Marbles’ return to Greece, which is being facilitated by UNESCO, was once again denied, via two letters sent to the organization by the British government and the British Museum. This, of course, has led to another dead-end in discussions regarding the matter.
In their letter to UNESCO, dated March 25, the British Museum curators addressed their letter to Assistant Director-General for Culture Alfredo Pérez de Armiñán. “After full and careful consideration, we have decided respectfully to decline this request. We believe that the more constructive way forward, on which we have already embarked, is to collaborate directly with other museums and cultural institutions, not just in Greece but across the world.
The British Museum admires and supports the work of UNESCO, fully acknowledging the importance of its unique ability, as an intergovernmental agency, to address the serious issue of the threats to, and the destruction of, cultural heritage around the world.”
Furthermore, “the British Museum, as you know, is not a government body, and the collections do not belong to the British Government. The Trustees of the British Museum hold them not only for the British people, but for the benefit of the world public, present and future. The Trustees have a legal and moral responsibility to preserve and maintain all the collections in their care, to treat them as inalienable and make them accessible to world audiences.
In pursuit of this aim, the Trustees would want to develop existing good relations with colleagues and institutions in Greece, and explore collaborative ventures, not on a government-to-government basis but directly between institutions. This is why we believe that the UNESCO involvement is not the best way forward. Museums holding Greek works, whether in Greece, the UK or elsewhere in the world, are naturally united in a shared endeavor to show the importance of the legacy of ancient Greece. The British Museum is committed to playing its full part in sharing the value of that legacy for all humanity,” they wrote.
Meanwhile, the British government also addressed a letter to Alfredo Pérez de Armiñán noting their respect for UNESCO’s work in preserving cultural heritage and “providing a forum for the resolution of international disputes.”
“The issue of the Parthenon sculptures in the British Museum has been the subject of much discussion over the years both within the Committee and elsewhere, and while the UK is not formally a member of the Committee, officials from the Department for Culture, Media and Sport and the British Museum have regularly attended and sought to assist the Committee in its work,” the letter stated.
However, while the British government wishes to cooperate with UNESCO, they clearly state that they cannot agree to the Greek government’s request for the return of the Parthenon Marbles since they “were legally acquired by Lord Elgin under the laws pertaining at the time and the Trustees of the British Museum have had clear legal title to the sculptures since 1816.”
“We have seen nothing to suggest that Greece’s purpose in seeking mediation on this issue is anything other than to achieve the permanent transfer of the Parthenon sculptures now in the British Museum to Greece and on terms that would deny the British Museum’s right of ownership, either in law or as a practical reality. Given our equally clear position, this leads us to conclude that mediation would not carry this debate substantially forward,” the British government added
The full letter can be found here and here.