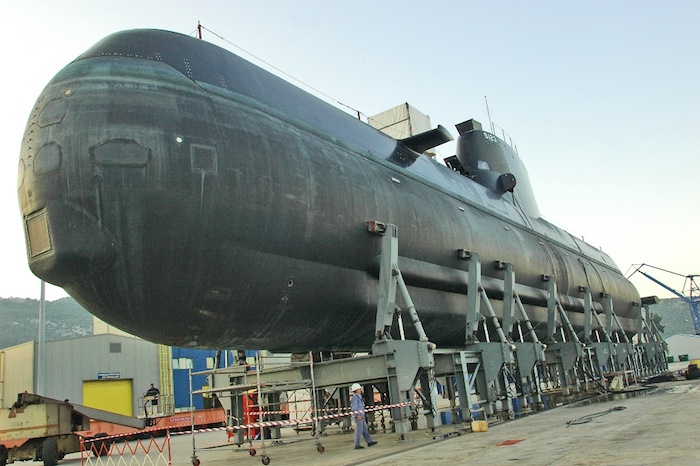 Another 32 individuals were indicted to stand trial before a Criminal Appeals Court on Thursday for kickbacks given in exchange for Greek Defense Ministry contracts.
The case, concerning a deal for the purchase of German submarines, was uncovered during a major and ongoing corruption investigation into the period when the now jailed Greek former Minister Akis Tsochatzopoulos was at the helm of the Defense Ministry.
The indictment relates to illegal and non-transparent payments made for the purchase of submarines by the Hellenic Navy in contracts signed between the Defense Ministry and German firm HDW-Ferrostaal. The Appeals Court justices found that 32 individuals should be tried on charges relating to acts of giving and accepting bribes, breach of faith and money laundering, among them business people and members of the military.
In each case, the charges are aggravated by legal provisions concerning embezzlement from the public sector. The indictments are in line with the recommendation made by Greek Appeals Court Public Prosecutor Efstathios Vergonis, who said that 32 of the 37 people charged in connection with the case should stand trial.
The defendants are allegedly involved in the movement and concealment of the illegal sums, which are believed to exceed 60 million euros, and were primarily moved via two companies. The evidence was judged insufficient to support the charges against the wife of former arms dealer Panos Efstathiou, as well as defendants Georgios Agouridis, Petros and Georgios Christodoulidis, and Georgios Kamaris.
Among those to stand trial are shipowner Michael Matantos, businessman Alexandros Avataggelos, former deputy director for procurements at the Defense Ministry Antonis Kantas, bankers Jean-Claude Oswald and Fanis Lyginos, arms dealer Panagiotis Efstathiou, lawyer Spiros Metaxas, former Tsochatzopoulos associates Yiannis Beltsios and Pavlos Nikolaidis, former head of Hellenic Shipyards Sotiris Emmanouil, former general secretary for arms procurements Spiros Travlos and several others.
The indictment ordered the continued imprisonment on remand for Kantas, who has been in custody pending trial for 12 months already. It allowed the release of Beltsios with restrictions until trial, on a 500,000-euro bail, forbidding him to leave the country and requiring that he reports to a police station twice a month. The appeals justices also agreed to a request by Emmanouil to reduce the bail for his release from 2 million euros to 500,000.
(source: ana-mpa)