GRNews
GreekReporter.comGreek NewsEconomyGreek PM Tsipras From Berlin: We Must Change the Stereotypes for Greeks...

Greek PM Tsipras From Berlin: We Must Change the Stereotypes for Greeks and Germans 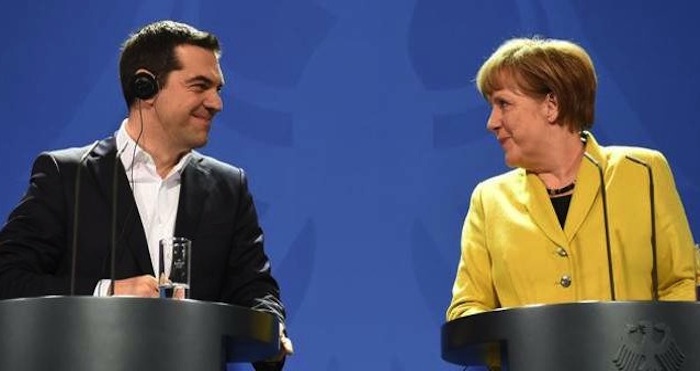 Greek Prime Minister Alexis Tsipras, who was welcomed in Berlin earlier today, held a joint press conference with German Chancellor Angela Merkel, after the second meeting the two leaders held in a period of just five days. The Greek Premier characterized the occasion as a helpful one in order for the two leaders to understand each other better, while thanking the German Chancellor for providing him with a chance to exchange views on the future of Europe. On her behalf, Merkel expressed her willingness to continue cooperation with Greece in a spirit of trust.

As Tsipras underlined, Greece has not been a success story since its first bailout program in 2010, noting the need to respect popular sovereignty as well as agreements. Moreover, he stressed the importance of removing stereotypes about Greeks and Germans. The newly elected Greek Premier said that stereotypes such as the ones of lazy Greeks and Germans being responsible for Greece’s woes should be dropped, amid a joint effort to fight corruption on scandals like the one involving German firm Siemens and resolving differences of the past that “cast shadows,” like the war reparations issue and the forced occupation loan, which still remain open. “But it would be wrong to simply blame foreigners. There are also internal reasons for Greece’s plight,” he noted. He also said the issue is not to destroy any positive reforms that have been done in the past few years, but to change the policy mix to tackle perennial problems in the economy.

The German Chancellor expressed her country’s willingness to assist Greece, saying that “we want Greece to be economically strong, to have growth, to fight unemployment, especially among the youth, to implement the necessary structural reforms, to create a functioning public administration and so on.” Additionally, she noted that the February 20 Eurogroup agreement is the starting point for negotiations, clarifying that it is not solely up to Berlin to decide on the Greek reforms program, but the Eurozone as a whole. “We both want to cooperate in a climate of trust, to be in a position to ask each other difficult questions, but in a spirit of cooperation. We face common challenges. We are determined that the structure of peace called Europe is a resounding success and it must continue for the next generation,” the German Chancellor explained.