Greek Gov't Vice President: We Honor the Agreement, We Expect Our Partners to Do the Same 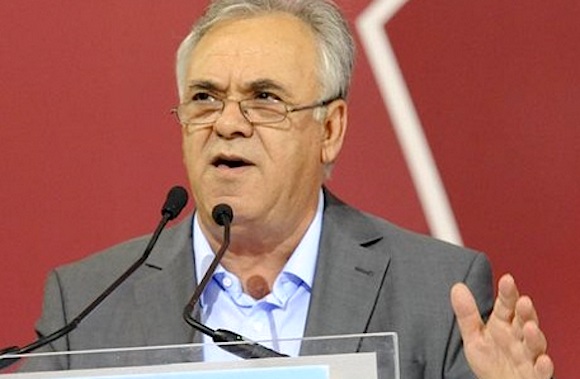 “We clinched an agreement, which is not fully reflected in the reactions of the European Central Bank,” Greece ‘s Government Vice President Yiannis Dragasakis late on Thursday told ANT1 TV.
He said that the message that ECB had been sending lately is that it was asking for an agreement, which was reached on February 20. It seems, however, Dragasakis commented, that the Eurogroup agreement was not incorporated in the decision. Dragasakis acknowledged there have also been positive messages from the ECB head Mario Draghi, such as his statement that there is no problem with the Greek banks.
“We honor the agreement and we expect our partners to do the same,” he said. We are in a stage of specifying the details of the agreement, he noted and said the recent statements by Eurogroup head Jeroen Dijsselbloem and German Chancellor Angela Merkel, who left the possibility open for the disbursal of part of the tranche under certain preconditions, were positive.
During the Eurogroup meeting on Monday, Greece will propose the six first reforms, which the government wants and the country needs, Dragasakis said, such as tackling tax evasion, redistribution of the tax burden, restructuring of the public administration so as to become fairer and more effective and rendering fiscal administration more stable. As far as the problem of liquidity is concerned, he admitted there is one but stressed it was not as acute as it is reported.
He reiterated there is no issue of the institutions or the troika coming to the country. The way of governance has changed and nothing can take place unless there is a decision by the Greek government. Whatever is being said on this issue, on the troika or the institutions’ arrival, serves specific purposes. “The era of the memoranda has ended and this is not a figure of speech,” he said.
He said the success of a SYRIZA-led government will equal the failure of the governments that were trapped in the memoranda and wondered why the “institutions” treat Athens differently compared to the past.
He was also explicit on the possibility of a third support package to Greece. “Thank you for the solidarity but there has never been such a discussion,” he said commenting on recent reports on the issue.
(source: ana-mpa)