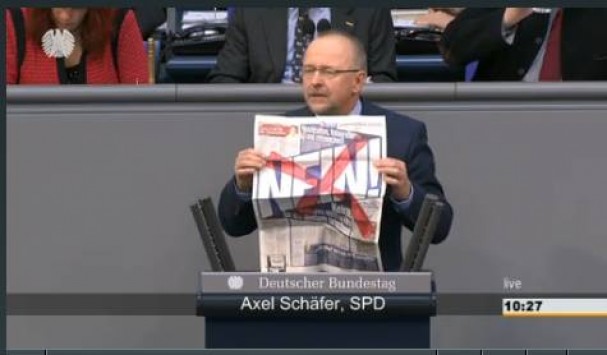 The German Federal Parliament approved Greece’s bailout program extension with 542 votes in favor, 32 votes against and 13 abstentions.
German Social Democrats (SPD) member Axel Schafer condemned BILD’s anti-Greek campaign in front of the German Parliament, holding yesterday’s front page with the “NEIN” headline — addressed to Greece — crossed out.
In his speech, Schafer noted that the debate regarding Greece’s exit from the Eurozone is nonsense, since that would not only destroy Greece, but the EU as well. “There is no German enforcement in Athens nor German domination in Europe, all states are equal,” he stressed, adding that the states will be able to discuss only “through mutual understanding.”
Furthermore, he also noted that Germany’s return to the European family after the war was only possible thanks to the partners who helped the country. Referring to Greek Prime Minister Alexis Tsipras statement “we won a battle but not the war” after the Eurogroup, he argued that in Europe there are no wars, only negotiations achieved through compromises.
“This decision is not easy for any parliament member. Discussions in recent days, even hours have not made the decision any easier,” said German Finance Minister Wolfgang Schaeuble. “”We Germans should do everything to keep Europe together as far as we can and bring it together again and again.”
“We’re not talking about new billions for Greece, we’re not talking about any changes to this program – rather it’s about providing or granting extra time to successfully end this program,” he said, adding that solidarity among members of the single currency “doesn’t mean you can blackmail each other.”
“Greece has pledged not to take any unilateral action without consulting the institutions, to repay all creditors in full and on time, to maintain the primary surplus,” he noted.