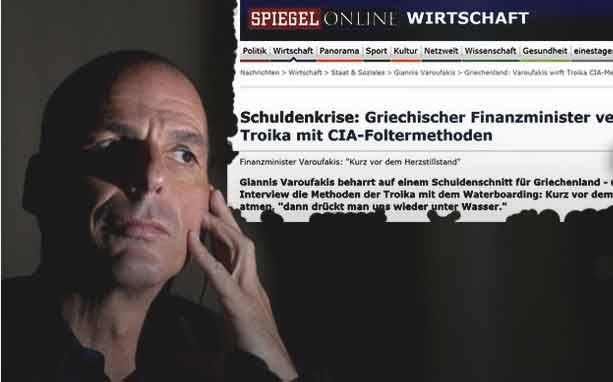 Greek Finance Minister Yanis Varoufakis insists that a debt haircut is the best option for Greece. In an interview with German news magazine “Der Spiegel” he attacked the Troika using harsh words and even went as far as comparing it with the CIA.
Varoufakis compared Troika’s methods to the torture method of waterboarding, which has been allegedly used by the CIA for the interrogation of known terrorists.
“There were also very good people at the CIA when waterboarding was used against their will and therefore were in a terrible moral dilemma,” said the Greek Minister, adding that “shortly before the cardiac arrest, we are granted a few breaths of air. Then we are put under water again, and the cycle starts anew.”
In regards to the country’s public debt, the Greek Finance Minister stressed that everyone knows that Greece’s debt is not sustainable without a new contract, however, he noted that he understands that the government would like to avoid using the word “haircut.”
In the end, he concluded, a debt haircut would be beneficial for both sides, even for the country’s creditors, since it will be cheaper than a bailout program extension.