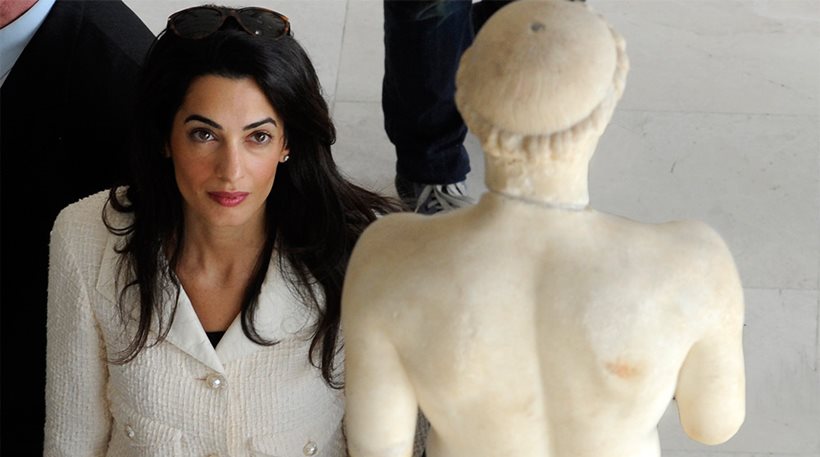 The new Greek government is considering a different strategy for claiming the Parthenon sculptures from the British Museum and will likely stop cooperating with Amal Alamuddin-Clooney and her law firm.
The new Minister of Culture, Education and Religious Affairs Aristides Baltas told foreign reporters that Greece is seeking a new strategy to bring back the sculptures. He was quoted by The Times as saying, “Our campaign will continue, but the strategy and how we go about that may be tweaked, if required. We’ll be looking over these details in the coming weeks and if we see a need to alter them, we will.”
Deputy Culture Minister Nikos Xydakis told the Greek Press that the marbles issue has gained good publicity after the involvement of Mrs. Clooney, who is a lawyer for London’s Doughty Street Chambers law firm.
According to The Times report, the new leftist government of Greece wants to cancel Greece’s contract with Amal Alamuddin-Clooney and the firm for financial reasons.
According to the report, the team of lawyers were working for the Greek government. In reality, the three lawyers had visited Greece to advise the government of legal options available. There was no talk of an exchange of money or any binding agreements. In such cases, it is usually the case that contracts are reviewed by legal departments before signed by government officials.
However, the cost of lawyers is unlikely to be a major concern bearing in mind the high cultural stakes for Greece. The new government has already made clear that it will continue efforts to reclaim the Parthenon sculptures legally. Even if funding were a problem, there are wealthy Greek foundations that have already stated they would be happy to assist in funding the initiative.
Former Culture Minister Constantinos Tasoulas told the Press that there is no signed contract between the previous Greek government and the law firm. He also said that Greece can only benefit from Amal Alamuddin-Clooney’s involvement.

The first-ever written exam for Greek citizenship is scheduled for May 16, 2021, according to an announcement from the Interior Ministry.
Crime