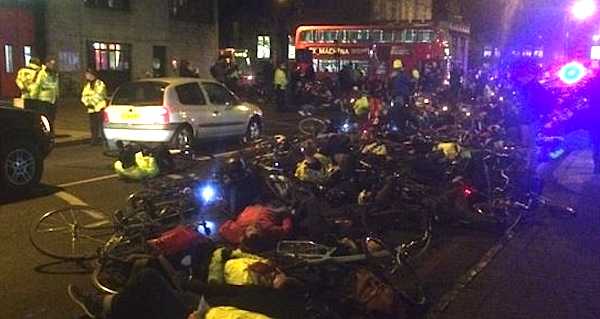 Hundreds of cyclists staged a “die in” protest on a busy high street where a Greek bike rider was knocked down and killed.

The vigil, held in memory of Greek-born music producer Akis Kollaros, saw Homerton High Street closed off to traffic as around 300 protesters lay in the road with their cycles. Kollaros, 34, who lived in Dalston, was killed after he collided with a tipper truck in the same spot last week.

Participants also lit candles in tribute to Kollaros while a number of campaigners gave talks on improving road conditions.

Kollaros, who moved to London from Athens, was the second cyclist to die on the capital’s roads this year.

Physiotherapist Stephanie Turner, 29, died on Saturday after her bike collided with a truck in Hackney.

More than £7,500 has been raised in donations through Go Fund Me by Londoners to help cover the costs of the cyclist’s funeral in Greece.

According to the Royal Society for the Prevention of Accidents, 109 cyclists were killed in the UK in 2013 with 75% of these taking place in urban areas.
(Sources: www.standard.co.uk, mashable.com, www.london24.com)