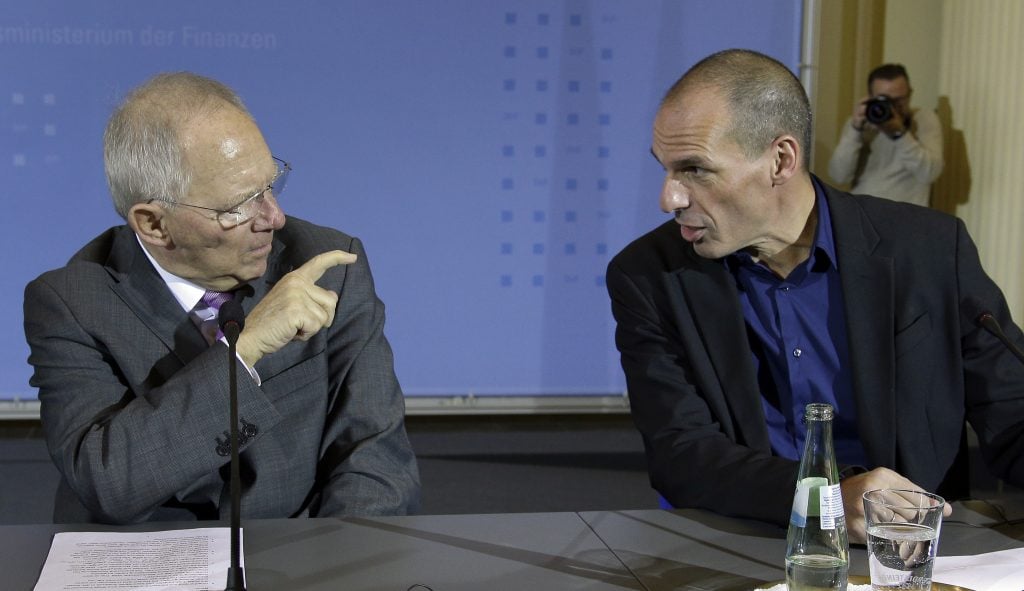 “If you’re not willing to even consider a clash, you’re not negotiating,” Greek Finance Minister Yanis Varoufakis told the Greek parliament on Tuesday.
The statement was made after the House gave the new government a vote of confidence and ahead of today’s crucial emergency meeting of euro zone finance ministers in Brussels.
Greece will ask for a bridge program until September to replace the existing bailout program. So far, euro zone finance ministers seem to reject the Greek proposal, with Germany’s Wolfgang Schaeuble telling reporters yesterday that if Greece doesn’t want to accept the final 7-biilion-euro tranche of the current bailout program, then “it’s over.” Last week’s meeting between Schaeuble and Varoufakis did not bear any fruit.
Another unproductive meeting with Netherlands’ Finance Minister and Eurogroup chief Jeroen Dijsselbloem in Athens showed that the euro zone is very skeptical about Greece’s proposal. “Financing goes hand-in-hand with demands and conditions. That’s exactly where the tensions lie,” Dijsselbloem told Dutch television on Tuesday.
European Commissioner for Economic and Financial Affairs, Taxation and Customs Pierre Moscovici said in an interview with AFP that any solution should be found “within the context of a common framework which exists already, which is that of the existing program.”
The Greek side is ready for a fight. “We’re not seeking a clash. We will do everything to avoid it. But you’re not negotiating if you’ve ruled it out,” Varoufakis said.
France’s Finance Minister Michel Sapin seemed more flexible in his stance by saying on Monday that “Europe needs to put together what some may call an extension, or the Greeks might want to call a bridge.”
Greece will present a 10-point plan including the reduction of primary surplus target of 3 percent of GDP to 1.49 percent, scrapping 30 percent of the reforms agreed in 2012 in exchange of 10 new reforms agreed with the Organisation for Economic Cooperation and Development (OECD), reduction of state debt by converting it to GDP-linked growth bonds or “perpetual bonds”.
Varoufakis recently said in an interview in Germany’s Stern magazine that the new Greek government is inexperienced and needs an adjustment period of a few weeks to present a complete program. Yet, he said, Greece is under a lot of pressure to continue the unpopular bailout program. “As it is, we are staring at the barrel of a gun,” he said.
It is very unlikely that the European finance ministers will come to any agreement this evening. “We have low expectations that any final agreements will be reached tomorrow or at the European Council” on Thursday, EU commission spokeswoman Mina Andreeva said during a press conference yesterday.
A scheduled Eurogroup will take place on Monday, February 16.