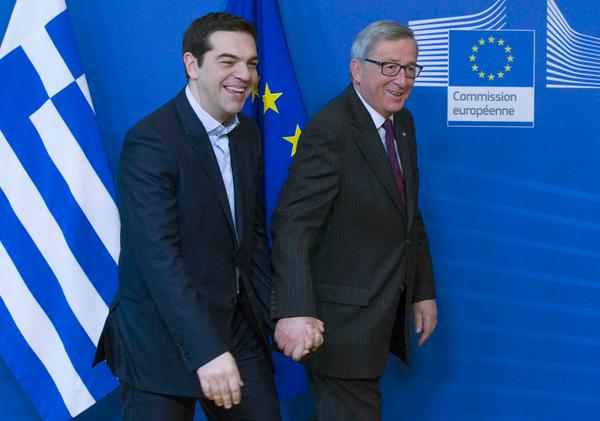 Greece respects European Union rules and procedures and will find a solution to the debt problem within the framework of EU law, Greek Prime Minister Alexis Tsipras said on Wednesday after talks with top EU officials in Brussels.
However, the Greek premier added that there is no agreement yet, but discussions are going in the right direction.
Tsipras met with European Commission President Jean-Claude Juncker, European Parliament President Martin Schulz and European Council President Donald Tusk. This was his first visit to Brussels as prime minister of Greece.
“I’m very optimistic that we will try to do our best in order to find a common, viable and mutually acceptable solution for our common future,” Tsipras said.
“I am very optimistic that these discussions are in a good way. Of course we don’t have an agreement already, but we are in the right direction to find a viable agreement,” he said.
The newly-elected Greek government has promised the Greek people that they will negotiate a debt writeoff and halt austerity measures required by international creditors, thereby provoking a standoff with the EU and the International Monetary Fund.

However, so far, the EU has shown a positive reaction to Greece’s proposals for handling the state debt.
“Our goal is to respect the people’s sovereignty in Greece and the clear mandate of our people. At the same time we respect the rules of the European Union. We want to correct this framework, not to smash it, and we believe that in this framework we could find a common viable solution,” The Greek premier said.
Tsipras said that the EU history is a history of disagreements but in the end, there are compromises and common positions.
“The Greek Prime Minister Alexis Tsipras is welcome in the European Parliament,” said Martin Schulz. “It is a very good sign that Mr. Tsipras is battling for European cooperation. I am extremely optimistic after our meeting today that we will find ways to reconcile. I would like to see the Greek government rely 100 percent on the European Parliament and European institutions. You are welcome to the European institutions.”
The Greek PM and European Commission President Jean-Claude Juncker met in the EU headquarters in Brussels. They walked hand in hand into an office where they talked in private without the presence of Press. The meeting lasted one and a half hours. The two men did not make any statements after their meeting.
Then Alexis Tsipras met with the European Council President Donald Tusk. After the meeting, the European official said that negotiations between Tsipras and the rest of the euro zone leaders will be “difficult.”
After the meetings in Brussels, the Greek PM flew to Paris where he will meet with French President Francois Hollande.