British Chancellor of the Exchequer: Greece-Eurozone Clash a Threat for Global Economy 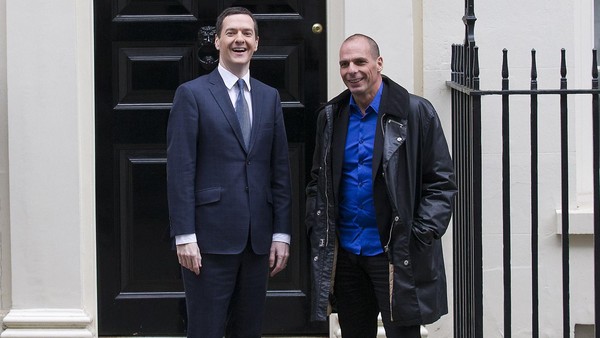 British Chancellor of the Exchequer and Second Lord of the Treasury George Osborne, in a London meeting with Greek Finance Minister Giannis Varoufakis earlier today, underlined that a potential clash between the Greek government and the Eurozone poses a major threat to the global economy. “We had a constructive discussion and it is clear that the standoff between Greece and the Eurozone is the greatest risk to the global economy,” Osborne said, adding that “I urge the Greek Finance Minister to act responsibly but it is also important that the Eurozone has a better plan for jobs and growth.”

Furthermore, the British conservative MP highlighted that such a development constitutes “a rising threat” to his country’s economy as well. “We have got to make sure that in Europe, as in Britain, we choose competence over chaos,” he underlined.

On his behalf, the Greek Finance Minister did not speak to the press after emerging from the meeting at 11 Downing Street, while he has scheduled a meeting with some 100 London investors and bankers. According to Reuters, “the message will be that we are very open to investments, that people should listen to the Finance Minister, who has got the Prime Minister’s absolute confidence, rather than noises from any other direction. We will be able to service the Greek debt on terms that will have no detrimental impact on bond holders, especially private.”

Varoufakis, who is heading to a meeting with Italian Prime Minister Mateo Renzi, as well as with European Commission President Jean-Claude Juncker later this week, has offered to table a revised debt deal within a month, while he has appointed US investment bank Lazard to advise on Greece’s negotiations with its creditors regarding a viable solution on the country’s debt, which currently exceeds 175% of its GDP.