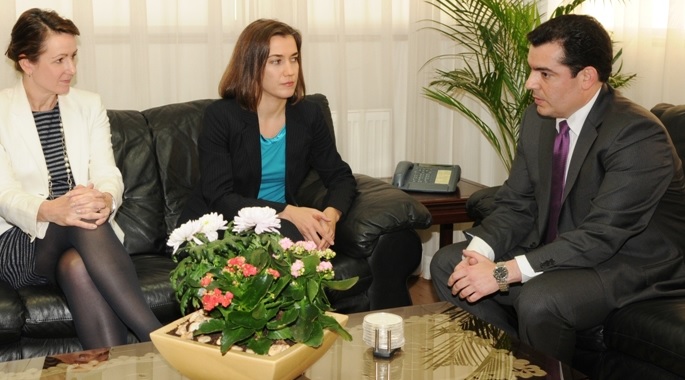 The official position of the Republic of Cyprus that Turkey should get a stronger message in order to change its provocative and illegal attitude that prevents the continuation of the negotiations on the Cyprus problem and destabilizes the entire region, expressed the Cypriot Defense Minister, Christoforos Fokaidis, in a meeting with the United States Deputy Assistant Secretary of State, responsible for Southern Europe and Eastern Mediterranean issues, Amanda Sloat, during her two-day visit in Nicosia.
This is the second US official meeting held at the Cypriot Defense Ministry within a period of six months. Fokaidis and Sloat reviewed the bilateral relations in terms of security and defense cooperation matters, while they also focused on the worrying rise of terrorist threat.
Fokaidis underlined that increased cooperation and good faith between those who stand against and fight terrorism is required. Referring to Cyprus, he said that it has followed a constructive and prudent approach, geared to the promotion of common interests, peace, stability and security in the region, while it has shown its willingness and ability to contribute to a common solution of the Cyprus problem in practice.
Although, as he underlined, the latest illegal and provocative moves by Turkey, undermine this joint perspective: “They are not only against the interests of Cyprus, but indeed against the common interest of the region, especially after the discovery of hydrocarbons in the entire Eastern Mediterranean basin.” Furthermore, Fokaidis pointed out that the Turkish actions come in a direct contradiction with international law and conventions, as well as with efforts to promote security.
Finally, he expressed the Cypriot government’s will to a strategic cooperation between the US and Cyprus. “This can have multiple positive benefits not only bilaterally but also for the entire region,” he concluded.