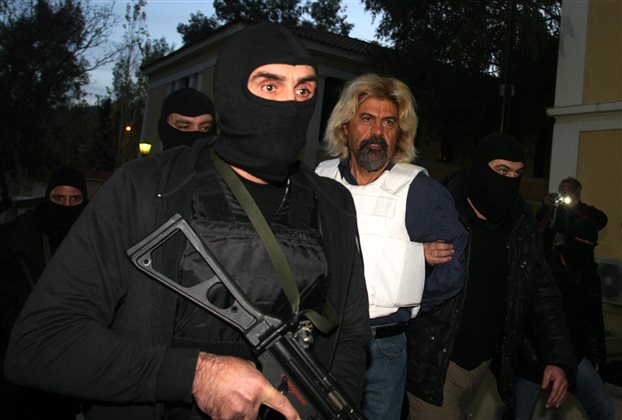 An assassination attempt against their alleged associate, convicted terrorist and former “November 17” member Christodoulos Xeros, were plotting imprisoned members of radical anarchist organization Conspiracy of Fire Nuclei (SPF). According to Greek Police chief Dimitris Tsaknakis, in a press conference held earlier today, the attack was to be held after their escape from Korydallos prison in Athens, Greece, which was planned to take place with the assistance of Xeros himself, but was finally exposed by authorities, just a few days before launch. The operation had the codename “Gorgopotamos.”
The announcement was based on elements drawn from previous police investigation and the arrest of two more criminals associated with the anarchist group in Athens and Thessaloniki.
As Tsaknakis described, the assassination plot was revealed after the examination of encrypted letters exchanged between SPF members, referring to Xeros’ “dismissal” because they considered him a “traitor” and responsible for the failure of the bombing attacks at the Itea police station and Korydallos’ Tax Revenue Service, which they thought was intentional.
Xeros is already serving multiple life terms for his involvement in Greece’s most active and dangerous terrorist group, “November 17.” He had escaped a year ago by disappearing during a prison leave and was arrested again on January 3, 2015.