GRNews
GreekReporter.comGreeceNew Democracy to Form Alliances With Pro-European Forces Even After a Clear... 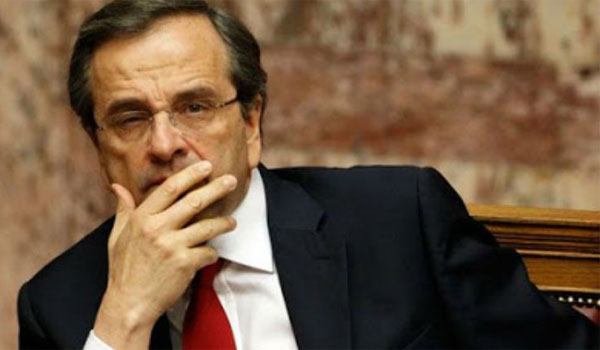 Greek Prime Minister and New Democracy President Antonis Samaras, during his yesterday’s campaign meeting in Peristeri, Athens, said that, on January 25, Greeks are not called to decide which party they want to rule the country but which Greece they want their children to live in. He once again repeated that 2015 will be the year of no Memorandums, no salary and pension reductions but there will only be development. In addition, he noted that if his party wins the elections, it will form alliances with pro-European forces, even if its win is a clear one.

Samaras underlined the need of national consensus and alliances, reminding that New Democracy’s founder, Konstantinos Karamanlis, secured Greece’s participation in the European Union and all Prime Ministers ever since kept his legacy alive by continuing the pro-European policy. “If New Democracy wins the elections, which will happen, even if we achieve a clear victory, I will again seek alliances with all pro-European forces, because that is necessary,” he said, adding that “no one stands alone as an emperor.”

Furthermore, the Greek Premier highlighted that the coalition government, with the participation of Democratic Left (DIMAR) and PASOK, was an unprecedented one because their main link was Europe. On the opposite, Samaras said, he is called to run against a candidate who calls anti-European parties, such as the Greek Communist Party (KKE) and ANDARSYA – MARS, to cooperate with his party. Although, as he added, the response of KKE was negative, a development which led SYRIZA to change its tune and speak of self-reliance. “What they meant was inability to form alliances. Because they have no one to stand by them, they have baptized it self-reliance. People do not believe this fairy tale,” he concluded.