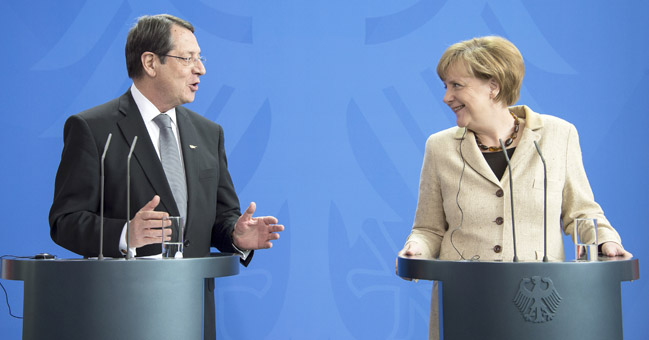 The President of the Republic of Cyprus, Nicos Anastasiades, had a phone conversation with German Chancellor Angela Merkel, briefing her on the latest developments regarding the Cyprus problem, was announced in a written statement earlier today. On her behalf, the European Union “iron lady” reiterated her country’s position of principles on the island’s sovereign rights, related to its Exclusive Economic Zone (EEZ), as Cypriot government spokesperson Nicos Christodoulides highlighted in a written statement on the matter.

The two leaders agreed to meet on the sidelines of the informal European Council to be held in Brussels on February 15, where they will hold an in-depth discussion on Cyprus’ national issues. According to Christodoulides, the Cypriot President “briefed Mrs. Merkel on the latest developments in the Cyprus problem and Turkey’s illegal actions within the Exclusive Economic Zone of the Republic of Cyprus.”

Earlier today, Anastasiades clarified that he does not intent to return to the negotiation table with the Turkish-Cypriot side under threat or blackmail, while he expressed his regret that the United Nations Secretary General has adopted the “logic of blackmail.” Repeating his commitment to a political statement that would make the reunification of Cyprus a reality, he further said that some have ignored Turkey’s ongoing blatant violation of Cyprus’ sovereign rights, namely its EEZ. “Ι will not succumb, under any circumstances, to threats or blackmail in order to be drawn into negotiations,” Anastasiades stressed in reaction to the UN Secretary General report on the organization’s operation on the island.