TechNews
GreekReporter.com Greece 'Norman Atlantic' Victims May Have Been Attacked by Sharks

'Norman Atlantic' Victims May Have Been Attacked by Sharks 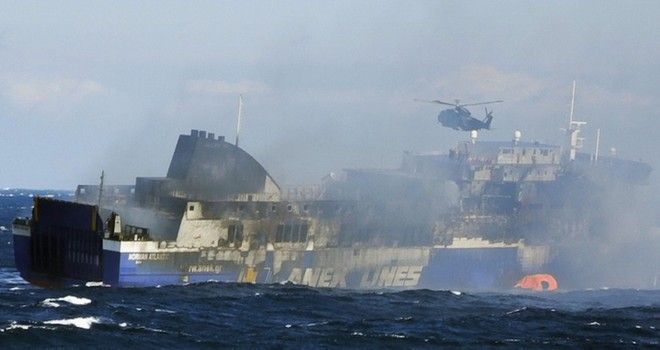 Shocking new press leaks regarding the “Norman Atlantic” naval tragedy that cost the lives of 11 people appeared in the Italian press on Monday. According to information emerging from the Italian investigators as well as the medical examiner, some of the victims who have jumped overboard to save their lives, may have been attacked by sharks.

Investigators said that wounds on at least one of the bodies resembled shark bites and a marine biologist will be called to assist the autopsies undergoing in Bari, Italy, Italian news agency ANSA stressed. Autopsies are to be carried out on nine recovered bodies. Based on the information emerging so far, though, it still remains unclear if the dead passengers were attacked by sharks prior to their death or after, when they were already drowned.

The Italian-flagged passenger ferry “Norman Atlantic,” which belongs to Greek ferry line ANEK, sailing from Patras in western Greece to the Italian port of Ancona, was 33 nautical miles off the small island of Othonoi when it sent a distress signal on December 28. At least 11 people were killed, while more than 400 passengers and crew members were rescued in a huge operation in the Adriatic Sea, amid bad weather conditions with low temperatures, rough sea and strong winds. The number of Greek citizens missing after the fire on “Norman Atlantic” is nine, while three of their compatriots died. The prosecutor of Bari, who is in charge of the investigation regarding the naval tragedy, will seek the assistance of Greek, German and Turkish authorities in order to identify the corpses found through DNA tests.

The ferry is currently docked at the port of Brindisi, although the city’s municipal authorities have declared that they will allow the charred ferry to remain there for two months at the most. Brindisi’s mayor, Mimmo Consales, said earlier this month that the fire-ravaged wreck would have to leave the city’s port within that timeframe for “both security and environmental reasons.”

Finally, the Bari prosecutor revealed that the analysis of the two ferry’s Voyage Data Recorders (black boxes) is due to start on Tuesday, January 20.