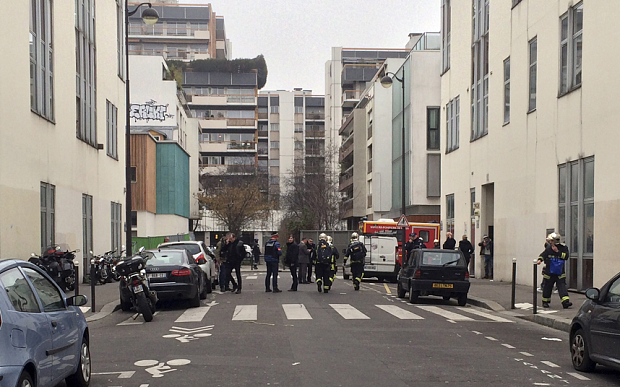 The Greek expatriate, Kyriakos Chatzikonstantinou, originating from Amyntaio, Northern Greece, is working – along with two other Greeks – in a laboratory located just one floor below the headquarters of the targeted magazine and as he revealed, by coincidence, one of his fiends knows one of the two assailants.

As he described “these were indeed difficult moments… At around 11:30 a.m. and while we were just sitting, we heard noise from the floor above. We are located on the first floor and the events took place on the second and third one. It sounded as if metal desks were thrown on the floor and we wondered what was going on,” he said regarding the deadly attack that cost the life of 12 people and lasted no more than 15 minutes, adding that police warned them to “stay inside and do not move.”

“Until the August holidays, a patrol car was parked outside the building 24/7. They were not checking us, they were simply present. Although, we found out that apart from the car – that was not there after the holidays – there were many undercover policemen, even inside the offices,” Chatzikonstantinou said regarding the building’s safety.

Furthermore, the eyewitness underlined that during the attack, the building’s main entrance was not guarded and was open due to maintenance work and he is not ruling out the possibility that the two gunmen knew that before the attack. In addition, Chatzikonstantinou expressed his belief that the offenders have already decided who their targets will be.