TechNews
GreekReporter.com Greece Migrant Ship with Hundreds Aboard in Distress Near Greek Island of Corfu 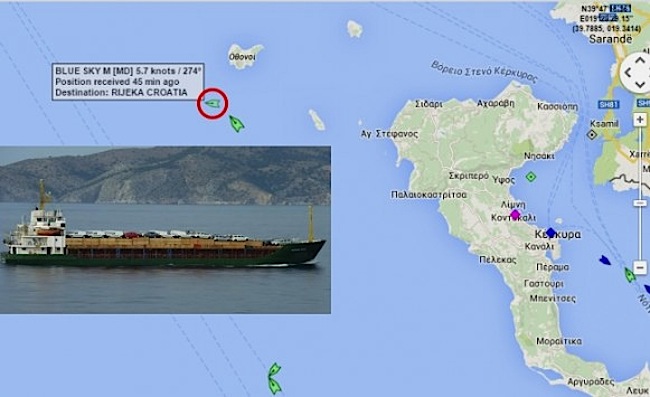 A “Blue Sky” cargo ship with a Moldova flag, carrying aproximately 600 illegal migrants has sent a distress signal from west of Corfu, through the European frequency 112.
There are initial unconfirmed reports in Greek news, that there are armed men aboard. The Italian coast guard immediately alerted Greek authorities about the incident and a Sikorsky helicopter of the Hellenic Navy along with the frigate “Navarino” which was in the area due to investigations regarding Norman Atlantic, are expected to arrive near the ship shortly.
According to the Hellenic Navy, the ship is located southwest of the Othonoi, a small island northwest of Corfu. The Port Authority of Corfu chairman, Spiros Andriotis noted that the extreme weather conditions are preventing the port of Corfu from sending boats to tow the ship back to safety.
Just two days ago, a ferry carrying around 400 people, many of which were Greeks traveling to Italy, caught on fire. The ship was located near Corfu but in Italian waters. At the moment, 8 people have lost their lives in the ferry fire and another 40 are missing.