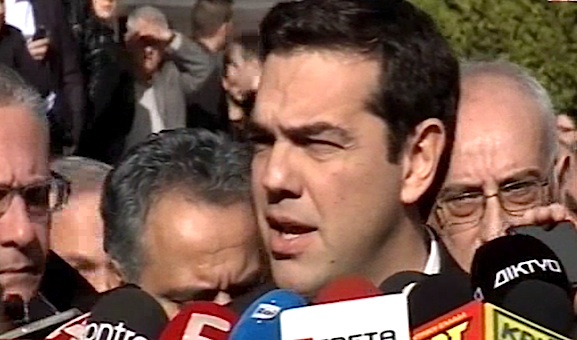 Main opposition SYRIZA leader Alexis Tsipras on Monday referred to a historic day for Greek democracy.
In a statement after the failure of Greece ‘s Parliament to elect President of the Republic, Tsipras said:
“Greek deputies, the democratic opposition parties proved that democracy can’t be blackmailed despite pressures or even plotting. When the vast majority of the Greek people are determined to put an end to the policies of the memoranda and austerity, the deputies can only meet their obligations and harmonize with the popular will. Today, the government of Mr. Antonis Samaras, that has plundered the society for two and a half years and has already been committed to take new measures, is a thing of the past. With the will of our people, the austerity memoranda will also be a thing of the past in a few days. The future has already begun, be optimistic and happy.”
Tsipras also expressed his “sorrow for the lives lost in Sunday’s accident with the burning ship as well as the hope that this painful adventure for hundreds of citizens will have a happy ending.”
DIMAR leader: Politics must obtain a progressive context
“Today’s voting is the start for developments in the country. The country is heading to general elections. The country must turn the page and politics must obtain a progressive context. We are working towards this direction,” Democratic Left (DIMAR) leader Fotis Kouvelis said on Monday after the completion of the third and fruitless round of the presidential elections.
Independent Greeks leader: We will be the guardians of democracy and of the Constitution
“Today is an important day for Greece,” stated Independent Greeks (ANEL) leader Panos Kammenos on Monday after the end of the fruitless third round of the presidential elections. “It is an important day because the ‘Samaras-Venizelos’ parenthesis has closed. This duo that delivered the country’s national sovereignty, the duo that accepted the country to be governed via e-mails and with orders by the troika, is now leaving with the vote of the Greek MPs,” he said.
KKE leader Koutsoumbas: Enough is enough
Enough is enough, Communist KKE secretary-general Dimitris Koutsoumbas said on Monday after the Parliament failed to elect a President of the Republic.
“We have paid enough for the lies of the EU parties. We have bled enough for the monopolies. What is needed in these elections so as to have a better day…of popular alliance, dynamic opposition, strengthening of the struggle for an overturning, is a much stronger KKE in the parliament,” he said adding that this is the important thing for the people and the country.
(source: ana-mpa)