GRNews
GreekReporter.comGreeceFirst Greek Hydroplane Airport to Be Built in Corfu

First Greek Hydroplane Airport to Be Built in Corfu 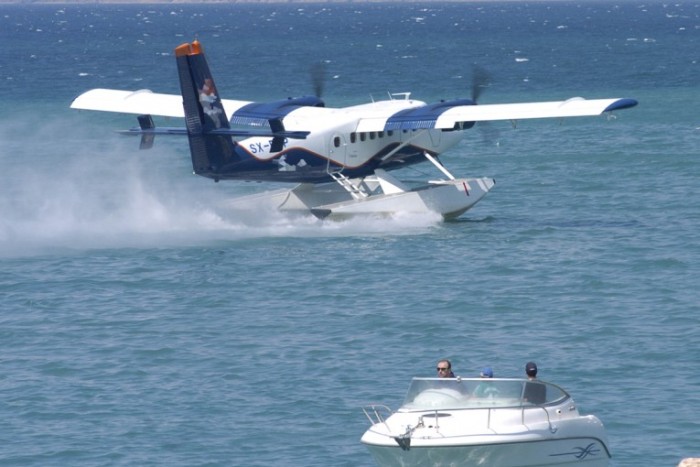 The decision for the establishment of Greece’s first hydroplane airport was signed on Monday, December 22, by the Minister of Mercantile Marine and Aegean, Miltiadis Varvitsiotis, and the Deputy Minister of Infrastructure, Transportation and Networks, Michalis Papadopoulos.
The hydroplane airport will be built in the island of Corfu and will be operated by the local port authority. The decision was signed in the presence of Deputy Culture Minister Angela Gerekou, as well as Corfu Port Authority President Spiros Andriotis.
Varvitsiotis stated that this new form of transportation will contribute to Greece’s tourism and economic growth, while improving connections between the mainland and Corfu.
“Greece’s sea, lakes and landscape will facilitate the operation of hydroplanes. This was the first crucial step. We are planning on signing more hydroplane airport licenses across the country in order to establish more routes for this summer,” said Varvitsiotis.
On his part, Papadopoulos noted that “the Greek Ministry of Infrastructure, Transport and Networks, in collaboration with the Ministry of Mercantile Marine and Aegean, paved the way for the establishment of the first hydroplane airport, which will be located at the port of Corfu. Today, we introduced a new means of transportation that will connect islands with the mainland, lakes and various destinations abroad.”