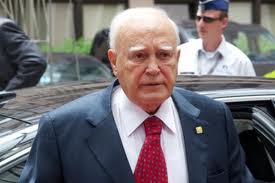 President of the Hellenic Republic Karolos Papoulias is paying an official visit to Algeria, following an invitation by his Algerian counterpart Abdelaziz Boudeflika.

Papoulias arrived to Algiers late Saturday and on Sunday morning he visited the memorial stone of the Algerian revolution martyrs and the warriors’ museum where he laid a wreath.

The Greek President stated that his visit to Algeria coincides with the 60-year anniversary from the start of the Algerian Revolution, underlining that Greece supported Algeria’s just struggle for independence from the very beginning and was among the first countries that had diplomatic relations with independent Algeria in 1962.

Papoulias reassured that Greece will continue to show its undivided support and friendship to the people of Algeria in the future as well.

At noon, the Greek President met with Algerian Prime Minister Abdelmalek Sellal and in the afternoon he will meet in private with the Algerian President, while afterwards the two countries’ delegations will have a broad discussion.

Later, the Algerian President will host an official dinner in Papoulias’ honor.

On Monday, the Greek President will be toured at the old town of Algiers (Casbah) and in the afternoon he will return to Athens.