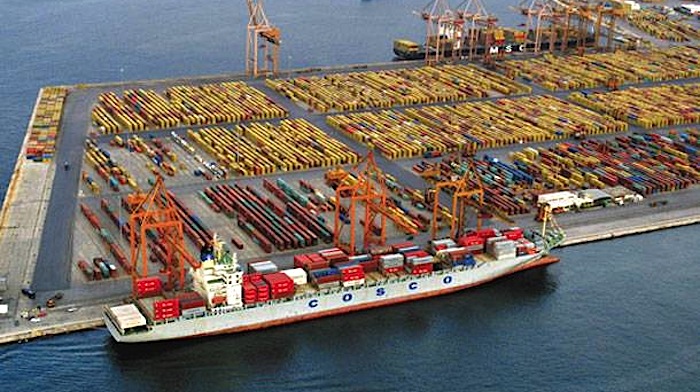 After a Piraeus Port Authority (OLP) general meeting green-lighted the agreement with Chinese company Cosco regarding the latter’s new 230-million-euro investment in Piraeus, Greece, the way is now open for Beijing to move ahead with its export plans in Europe and for Piraeus to become the biggest Mediterranean port in terms of cargo traffic.
The deal with Cosco was signed last week and after its ratification by the Greek parliament in the next few days, Piraeus will be able to start expansion works on its western side that are seen raising the total capacity of its container terminal to 7.2 million TEUs (Twenty-foot Equivalent Units) per annum by 2021. That will allow Greece’s main port to handle the volume required in order to become the main entry point for Asian trade toward Europe.
The other parts of this international axis of commerce are in the Balkans and further north, where projects worth over 3.5 billion euros are currently being implemented in countries such as Serbia, Montenegro and Hungary, to improve rail and road infrastructure. They form part of the Chinese plan titled “New Silk Roads,” one of which, the “21st Century Maritime Silk Road,” will pass through Piraeus.
A National Bank of Greece (NBG) study has shown that an increase to 4.7 million TEUs in 2015 from 3 million in 2012 could bring additional revenue of 900 million euros per year to Greece, leading to an added value of 0.4% of GDP and some 9,000 new jobs.
(source: ANSA)