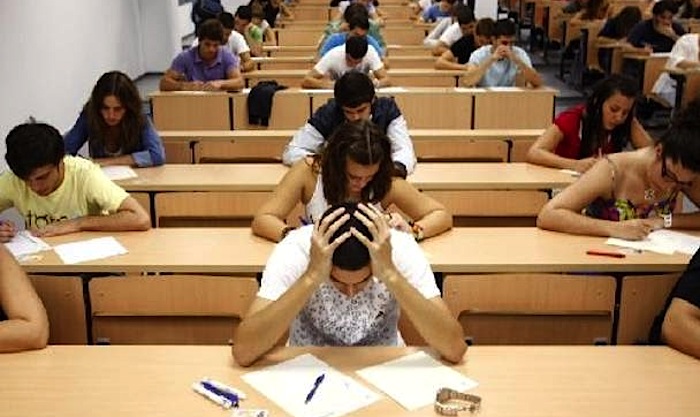 Since the restoration of democracy in 1974, Greek high school students have become guinea pigs as 22 different Education Ministers – two of them twice – have tried to implement reforms that would put their name in history rather than help students get in the higher education school of their choice.

There is something about the Education Ministry that makes Ministers come and go like temporary secretaries in a company. Given the fact that Greek Premiers give out offices and portfolios to MPs according to the votes they bring from their district, the Education Ministry has often fallen to the hands of people who have very little to do with education. Not very strange, considering Greece has been the country where a Defense Minister had never served in the army. But that’s another story.
Unfortunately for Greek high school students who want to pursue university and post-graduate degrees, the entry exam system changes almost every two years and according to who sits on the Minister chair. It is not unusual for a student to start his university entry studies under one system and find a different system when exam time comes.
Greece ‘s Education Ministers change every time there is a government reshuffle. They are a disposable species. Perhaps that explains the fact that they try to leave their mark while in office; try to force their name in Greek political history. And if they do, like Gerasimos Arsenis in the late 1990s, it will be painted in the darkest of colors. And no matter what they do, students will usually disagree with their programs. Then the government will change and they will disappear in the black political abyss.
The most recent example is the infamous decision to implement a pool of exam topics for entry exams. That was the idea of previous Education Minister Costas Arvanitopoulos in 2013. Current Minister Andreas Loverdos wants to change that. However, the 10th grade students gave exams 50%-based on material taken by the pool of topics. Their grade will be added to the final graduation grade when they give exams to enter universities.
Loverdos said that he received tons of letters opposing the topics pool as soon as he was appointed in office and that he will change it.
The system of entry exams in universities has changed ten times in the past 30 years. The first change came in 1983 under PASOK’s Apostolos Kaklamanis with five bundles of topics. George Papandreou brought another change in 1988. The only grades that counted were the exam grades, and high school grades were not taken into consideration.
Ιn 1991, Giorgos Souflias changed the grading system using different grade coefficients. In 1996, technical high school graduates had to give extra exams to enter technical colleges. In 1998, the “Arsenis bill” brought riots and general school unrest that cost Gerasimos Arsenis his re-election. The bill wanted high school students to give general exams in 11th and 12th grade before entry exams.
In 2001, Petros Efthimiou tried to correct the “Arsenis bill” and changed things again. Now 11th grade students would give exams on 9 lessons and 12th graders on 10 lessons. Marietta Giannakou (2004-2007) abolished 11th grade exams altogether and decreased the number of exam lessons to six for 12th graders. Gradewise, a 10 out of 20 was enough to enter a university. In 2010, Anna Diamantopoulou abolished the minimum grade needed (10) and 10,000 points were enough for university entry.
Last year, Costas Arvanitopoulos brought the topics pool and restored exams in 10th grade. Now Loverdos is working on a new reform that will change the “Arvanitopoulos bill” of 2013. The question is if he can make it before the snap elections.
Two Greek Prime Ministers have served as Education Ministers before leading the country. George Papandreou was appointed Education Minister twice (1988-89 and 1994-1996) and Costas Simitis (1989-90). Both are remembered for other things,and probably no one remembers they ever served the office of Education Minister.