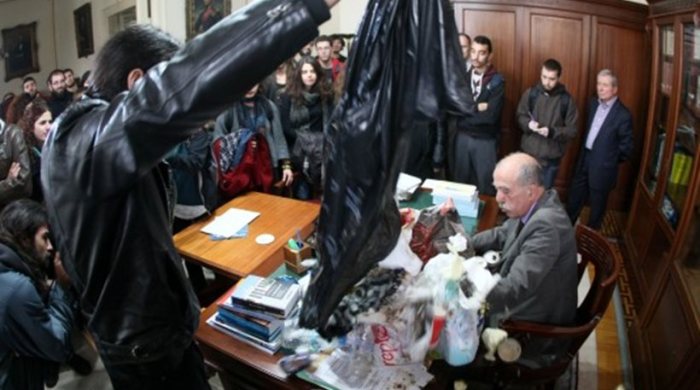 “This is what Greek universities have come to,” said a student after emptying a garbage bag in the University of Athens Vice Rector’s office.
A group of students attempted to visit the office of Rector Theodoros Fortsakis in order to discuss the establishment’s problems. However, they were told by Vice Rector Antonis Kalokairinos that Fortsakis was on a trip abroad.
Thirty students entered the Vice Rector’s office, shouting slogans in order to protest against the current situation. A student representative gave a five minute speech against Fortsakis.
The student brought up issues related to the university’s cleanliness, supervision and police presence, the elimination of older students, as well as the proposal for electronic voting. In the end, he emptied a garbage bag on the Vice Rector’s desk, while one of his colleagues followed his example.
Meanwhile, the University of Athens Rectorate stressed that they are always open to discussion, however that would require for all interacting parties to respect the law and principles of democracy.
Fortsakis described the incident as “unacceptable,” while he noted that in terms of security and cleanliness, the previous Rectorate had delayed all relevant competitions, therefore the university was forced to either wait for a new competition or hire private security and cleaning staff.
Furthermore, he noted that due to lack of funds from the Greece ‘s Education Ministry, he would need ten more days in order to resolve the cleanliness issue.