Russian Tourists Get Married at the 'Parthenon' 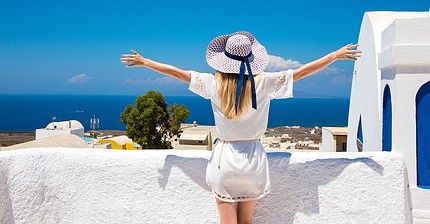 A new trend has begun, initiated by Russian tourists. People are visiting Greece to get married or to renew their wedding vows at the ‘Parthenon.’
More and more tourists from Russia are making their way to the northern Greek resort area of Chalkidiki, near the northern port city of Thessaloniki to get married ancient Greek style. A hotel, that resembles the Parthenon temple, hosts many wedding ceremonies. Russians never fail to show their admiration of ancient Greece. This hotel, which is an exact replica of the Parthenon temple of the Athens Acropolis is very popular for weddings. Guests wear the traditional ancient clothing, called chlamyda, and parsley wreaths on their heads.
This unique wedding ceremony is organized by a wedding planning company in Russia. The company organizes everything from clothing, make-up artists, hairdressers, the reception and fireworks, all to feed their customer’s needs.