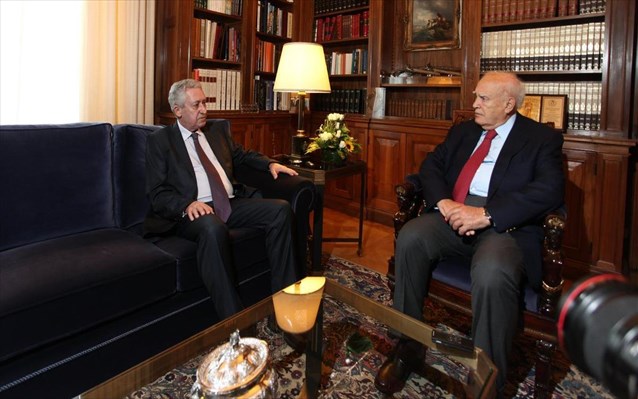 Mr. Kouvelis requested from the President, the call for a political leaders’ meeting regarding the restructuring of the country’s debt. In addition, he underlined the significance of political understanding amongst the parties noting that the contradictions and the confrontations between them are acceptable in the context of the democratic operation. However, the political powers should leave aside their disagreements and find common political ground on the debt negotiations, otherwise the risk for adverse results on citizens is high, DIMAR leader added.

President Papoulias said he was glad to hear about mutual understanding despite the differences between the political parties, noting however, that this understanding is also necessary for national issues. “This is my position, this is what I told Prime Minister Antonis Samaras and Main Opposition SYRIZA leader Alexis Tsipras as well,” he concluded.

Yesterday, Mr. Papoulias had consecutive meetings with Mr. Samaras and Mr. Tsipras and stressed to both leaders that a “minimum consensus of political forces” is necessary in order for Greece to overcome its political problems both in internal and international levels. Despite the official statements, though, Mr. Tsipras appeared firm on his demand for early general elections, while Mr. Samaras denied this scenario. “I had the opportunity to repeat that there will be no early elections. I am deeply convinced that Greece’s parliamentary deputies, will consider responsibly and elect a president of the Republic in February. We have covered too much ground to now throw everything up into the air,” Mr. Samaras stated yesterday while exiting the Presidential Mansion.