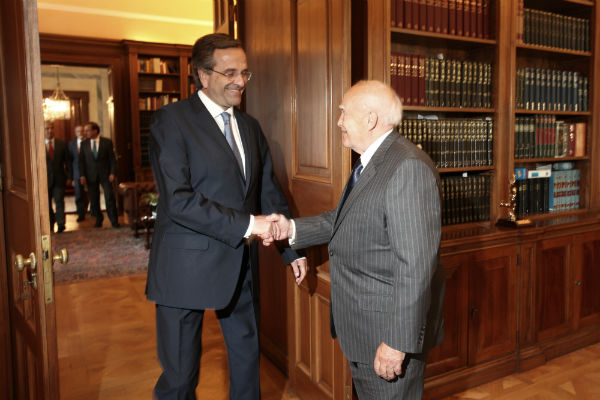 Prime Minister, Antonis Samaras, was received by President of the Hellenic Republic, Karolos Papoulias, only a few hours after he received main opposition SYRIZA President, Alexis Tsipras, at the second of a series of scheduled meetings to be held with political leaders. Mr. Papoulias requested from the Prime Minister “minimum understanding” amongst the country’s political forces, a request he also expressed earlier to Mr. Tsipras.

“All that is coming and all that has happened is very interesting. They have left their mark. The situation demands a minimum understanding,” was amongst the first things the President said to Mr. Samaras, as he entered his office. Mr. Samaras appeared positive in such a prospect, answering that “I heard you saying so this afternoon and absolutely agree,” while adding that “I came to brief you on the situation on the interior of the country and the international situation, about the course of the negotiations and the trip to Cyprus and Egypt.”

A few minutes later, though, while exiting the Presidential Mansion, Mr. Samaras attacked main opposition SYRIZA, stressing that he will not give in to their demand for early elections, as it is something that Greek people do not desire and the markets fear. “I had the opportunity to repeat that there will be no early elections. I am deeply convinced that Greece’s parliamentary deputies, will consider responsibly and elect a president of the Republic in February. We have covered too much ground to now throw everything up into the air,” the Prime Minister concluded.