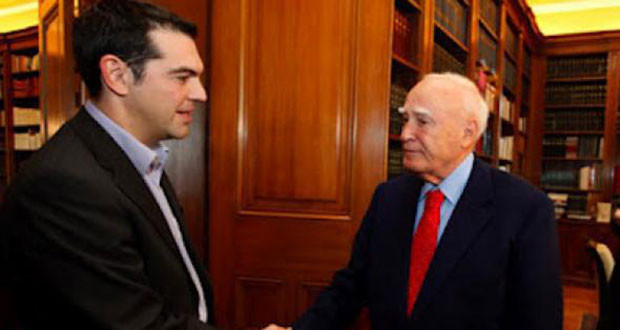 President of the Hellenic Republic Karolos Papoulias received main opposition SYRIZA President Alexis Tsipras earlier today, in the first of a series of scheduled meetings with political leaders. During the meeting, the President asked Mr. Tsipras for a “minimum consensus of political forces” in order for Greece to overcome its political problems both in internal and international levels. Mr. Papoulias underlined the need for all political forces to remain united in order to face the challenges together, adding that “everything else can be figured out.”

From his side, the leader of the main opposition, asked Mr. Papoulias to convene a council of the political party leaders in order to agree on a date for early general elections, before the election of a new Greek president by parliament and before a new agreement is reached with the country’s lenders, noting that the President’s request for political consensus will be discussed in detail later, after the journalists departed. Mr. Tsipras appeared positive on the consensus of political forces underlining, though, that Greek people are those deciding which path to take.

Mr. Tsipras also said that the political party leaders’ council will also explore the potential for an agreement on who will be the new President of the Republic to ensure that he will be elected with a strong majority in parliament, pointing out that these two moves will send abroad a message of unity of the political powers. “The country needs stability to proceed with the democratic process in an orderly manner, with unity and not in conflict, and present to the people two plans, namely continuation of the same policy or negotiation” the President of SYRIZA said, at the same time accusing Prime Minister, Antonis Samaras,of risking destabilizing choices for leading the country to prolonged tension until the Presidential election.