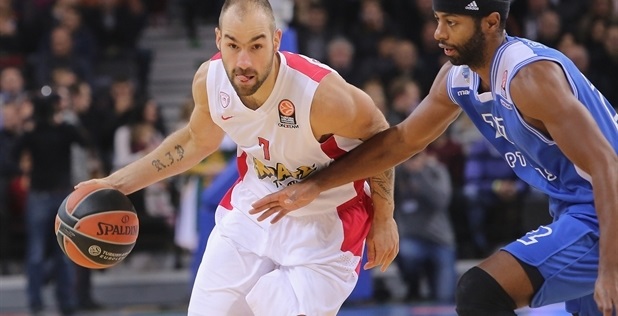 Olympiacos found it hard to cope with newbie Neptunas from Lithuania but in overtime managed to grab the away win (81-85) for the Euroleague basketball Tournament. Back in Athens, Panathinaikos put together one of their finest performances since the departure of head coach Zeliko Obradovic and crashed Turkish side Fenerbahce 91-73.
Neptunas – Olympiacos 81-85 (ot 76-76)

Former Euroleague MVP holder Vasilis Spanoulis paced the winners with a career-high 34 points – 17 of which in the fourth quarter and overtime. Kostas Sloukas added 13 while Bryant Dunston and Matt Lojeski had 10 each for Olympiacos. The Greek side moves atop Group D with a 3-0 record while Neptunas drops to 1-2.

With an incredible display of fine basketball, one pulled out of its glory days, Panathinaikos stunned their ex head coach Zeliko Obradovic and by shooting incredibly accurately behind the arc (69.2%), secured an important win which lifts them up to second (2-1) in Group C, just below FC Barcelona. Panathinaikos tied a club record with 18 three-pointers, 7 of which were scored by MVP, A J Slaughter (23 points) while Dimitrios Diamantidis distributed 10 assists reaching an all-time record of 1.000 Euroleague assists.