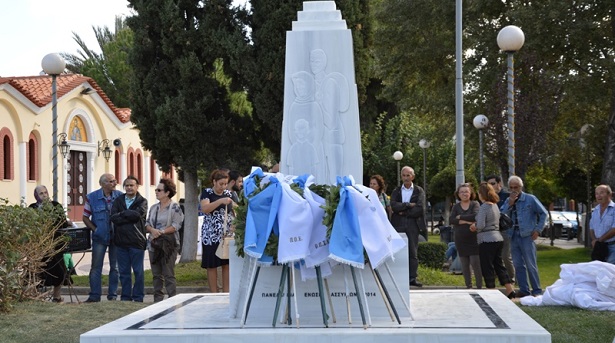 A memorial for the Assyrian victims of the Turkish genocide of Christians during World War I was unveiled in Athens, Greece, a city that hosts approximately 8,000 Assyrians. According to estimates from that era, the Turkish genocide claimed 750,000 Assyrians, 1.5 million Armenians and 500,000 Pontic Greeks.
The ceremony for the unveiling of the monument was attended by four hundred people, including members of the Assyrian, Greek and Armenian communities, as well as representatives from the Armenian embassy. The monument was officially presented by the current and former Mayors of the Greek capital.
President of the Assyrian Union of Greece Kyriakos Betsaras opened the ceremony, while both the Director of the Assyrian Genocide Research Center, Sabri Atman, and the former Mayor of Egaleo gave speeches.
The three communities have cooperated in the past regarding the issue of the Turkish genocide. In fact, in 2010, the Greek Parliament held a discussion on the topic of “Three genocides, One Strategy.”
Discussions about the erection of a monument began almost three years ago, and last year, the Assyrian Union of Greece’s request to build a monument to commemorate the victims of the Assyrian Genocide was met.
This is the world’s 9th genocide monument. Other monuments have been erected in: Jonkoping, Sweden; Liege, Belgium; Arnouville, France; Yerevan, Armenia; Fairfield, Australia; Wales, United Kingdom; Los Angeles, California; Chicago and Illinois.