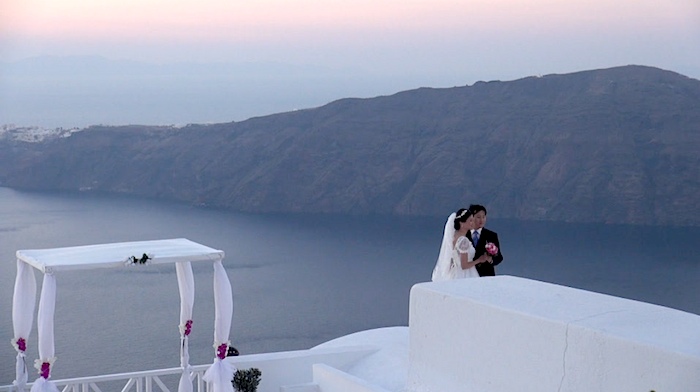 Summer is already gone, along with the high temperatures in the world-famous Greek islands, but young Chinese couples do not seem discouraged and have already started their fall and winter invasion to Santorini.

The cosmopolitan island tops the vacation choice of Chinese couples, not only for ideal summer holidays but also as a number-one destination for a memorable, romantic wedding. A Chinese couple we met in Santorini, expressed their love and enthusiasm for the Greek island and noted that it’s gaining great popularity in China. Watch the video below:

According to Alina Tsolakakis, managing director of Aqua Vista Hotels, “the island’s premier suites have been mostly occupied by Chinese tourists at an increasing number each fall, extending Santorini’s season.” Tourist agents from the immense Asian country note that 20,000 Chinese citizens are planning to visit the island throughout fall and winter in order to enjoy its unique beauty and hospitality or even have their wedding ceremonies in its magical landscape with the view of the “lunar” caldera.
This will not be the first time that Chinese couples choose Greece to exchange vows of eternal love and devotion. In April, the old fortress of Chania, Crete, became the wedding scene for 18 couples and the ceremony was presented by a famous Chinese TV hostess, who characterized Greece as a mythical destination, underlining that those deciding to get married there share a deep knowledge of its history and culture.

A month later, another 11 brides and grooms from the far eastern country tied the knot in Santorini, proving that their love for the Greek island is not just a trend, as the first “Rose Wedding” (as they call the group weddings) took place in Santorini, in 2006. Back then, Greek Tourism Minister Olga Kefalogianni commented that it is an ideal way to advertise Greece, adding that “the aim is to get the message through that Greece is an ideal destination.”
Subscribe here to get Greek Reporter's latest news stories and content delivered to your inbox, once daily!