GRNews
GreekReporter.comGreeceVenizelos Optimistic That No Snap Elections Will Be Needed In Greece

Venizelos Optimistic That No Snap Elections Will Be Needed In Greece 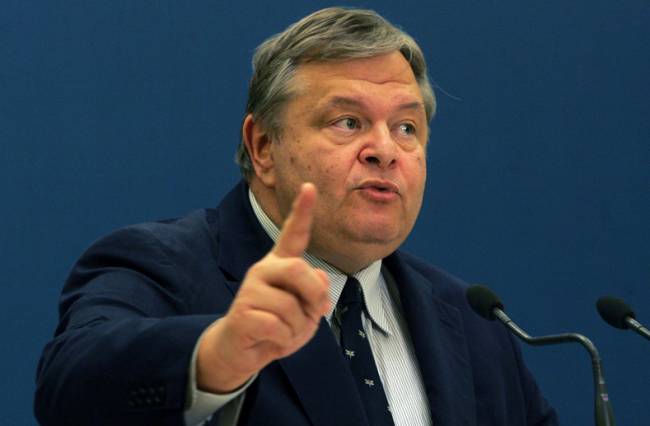 Greece’s coalition government may propose a “non-political figure” for president in March to seek consensus and avoid snap elections that could derail its economic progress, Deputy Prime Minister Evangelos Venizelos told Reuters in New York.
“Although the Greek president’s role is largely ceremonial, failure by parliament to elect one would force early national elections with no likely outright winner, plunging Greece into a political crisis a few years after narrowly avoiding default,” Reuters notes.
In a recent New York interview, Venizelos said that the government was open to candidates who may not be politicians, but perhaps academics or even cultural icons. The move would break with decades of tradition.
“The list for president is very limited,” Venizelos said while attending the U.N. General Assembly. He did not disclose names for candidates. “We have some scenarios but we are absolutely open.”
Greece’s 300-seat house is currently too fragmented to conceivably come up with the 180 votes needed to elect a president. The ruling coalition of Prime Minister Antonis Samaras’s conservative New Democracy and Venizelos’s socialist PASOK party has 154 seats.
Venizelos said they would need to convince 26 deputies from other parties to back the government’s choice.
“I’m optimistic because public opinion … is against the idea of premature elections,” continued Venizelos. “The large majority of public opinion understands very well the need to protect the political, governmental stability”
Opinion polls also show that no party could win outright if elections were held now. New Democracy is projected to garner about 22%, behind the radical left main opposition SYRIZA, which has 71 seats in parliament and leads polls with 26%.
“It’s not possible to form a one-party government. It’s absolutely vital to prepare a coalition,” Venizelos said.
Athens expects to reach agreement on additional debt relief this year. It is expected to be Greece’s final step towards funding itself without outside help. A major hurdle in its path is the political instability stemming from the president’s election, a process Venizelos said needs to begin in early February. Venizelos said parties and deputies must weigh the gravity of the situation.
“The nationally right option is to protect the stability and to elect the new president as a result of a consensual process,” Venizelos said.