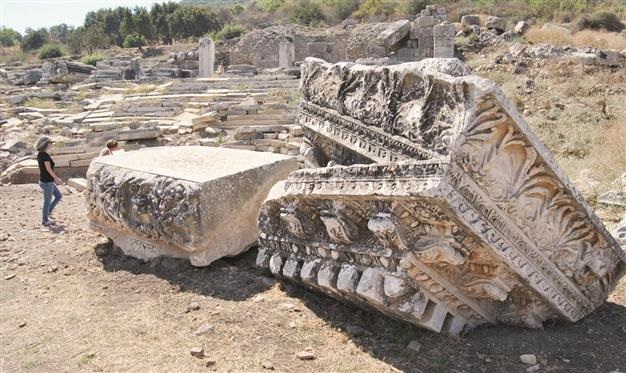 The temple of Egyptian god Serapis, which was discovered in the ancient Greek city of Ephesus, Turkey, will be restored to its original condition. It is estimated that the temple collapsed during an earthquake in the region.

The temple was built in the 2nd century A.D. as a devotion to the Egyptian god and it is considered the best preserved and largest temple in Anatolia. It was constructed on an area of 7,700 square meters while the area of the structure is over 1,000 square meters.

Although it was scattered by the earthquake, almost all of the temple’s pieces are still intact. Ephesus Foundation has undertaken the restoration project, following the restoration of the Celsius Library. Ephesus Foundation President Ahmet Kocabıyık said that the two restorations will largely contribute to the region’s touristic growth. “The Celsius Library comes to mind when we say Ephesus, but when a temple like Serapis is revived, it may become the new face of Ephesus,” he told Turkish newspaper Hurriyet.

The projects are of great importance as the ancient city of Ephesus receives approximately 2 million visitors from across the world every year.

Kocabıyık stated that the restoration work will take nearly seven or eight years and will cost 3-5 million dollars.