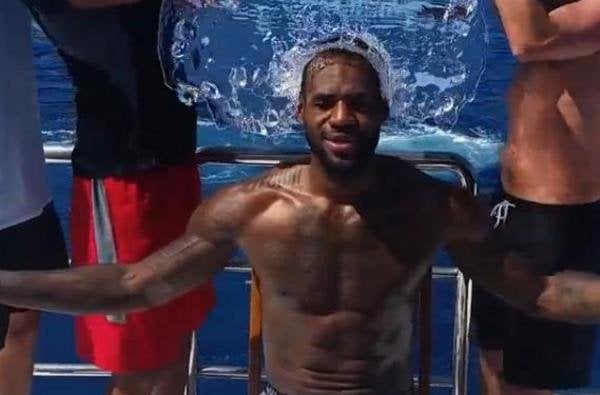 NBA superstar LeBron James just got dunked in the ALS Ice Bucket Challenge during his stay on the island of  Santorini in Greece.
The Amyotrophic Lateral Sclerosis Ice Bucket Challenge has drenched many participants worldwide. The contest requests subjects to have a bucket of ice water drenched over his/her head and challenge others to do so within twenty-four hours, or make a donation to the fight against ALS.
Here’s LeBron taking the challenge on the Greek island of Santorini, where he vacations with his family.

James accepted the challenge from fellow NBA star Kevin Durant and comedian Kevin Hart, and followed suit by nominating president Barack Obama.
The campaign has raised more than four million dollars for the ALS Association between July 29th to August 12th alone, more than the same period last year that generated 1.2 million dollars. Over 70,000 new donor members have offered funds to the ALS Association.
President and CEO of the ALS Association Barbara Newhouse said the campaigns results are phenomenal.
“We have never seen anything like this in the history of the disease… We couldn’t be more thrilled with the level of compassion, generosity and sense of humor that people are exhibiting as they take part in this impactful viral initiative.”