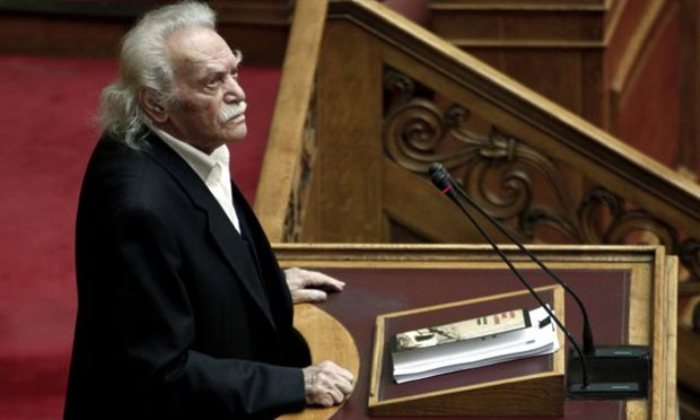 Greek SYRIZA MEP Manolis Glezos, wrote an emotionally-charged letter to Russian President Vladimir Putin asking him to rethink Russia’s import embargo to Greek goods.
Glezos pleaded to Putin to exclude Greek agricultural products from Russia’s recently announced embargo on imports from the EU, the USA and other countries after the west-imposed sanctions to Russia for its involvement in the Ukrainian crisis.
He mentioned the historical friendship of Greece and Russia underlined that he understands the reasons that led the Russian leader to impose an embargo on European Union agricultural products.
“On behalf of the Greek people, who are going through a period of extreme deprivation, I appeal to your humanitarian feelings to reconsider your decision as regards the Greek farmers,” wrote Glezos.
At 91 years of age and the European parliament’s oldest member, Manolis Glezos is still very much alive and kicking.
Recently, he had intensified his struggle for the repayment by Germany to Greece of a loan made during the Nazi occupation of Greece (1941-1944), and for the payment of war reparations to the families of the victims of Nazi atrocities.
Manolis Glezos became a hero in May 1941, when he tore down the Nazi swastika from the Acropolis weeks after the country was occupied by the Germans.
He was elected in the European parliament with the main opposition Radical Left Coalition (SYRIZA) party.