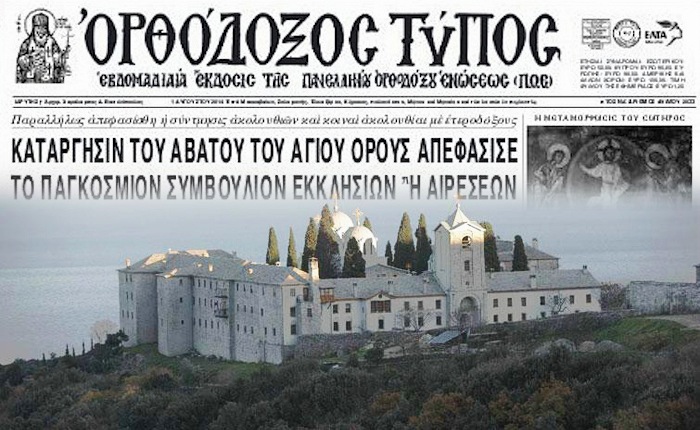 Greek Newspaper “Orthodoxos Typos,” recently reported that the World Council of Churches (WCC) decided the repeal of Mount Athos avaton, allowing women to visit the holy area, during its latest convention in Busan, South Korea.
The newspaper wrote that during the convention, 16 agreements between Christian churches were signed, of which three (7th, 8th and 16th) refer to Mount Athos in Chalkidiki, northern Greece. “The 16th agreement refers to the repeal of the avaton in Mount Athos and in other places of the world.”
Not True
However WCC in an email to Greek Reporter states that the report is simply not true.
“No WCC governing body has requested that the ban on women entering Mount Athos be repealed, not the Assembly which met in Busan, Korea, in 2013, not the WCC Executive Committee that has met twice since then, and not the Central Committee which met recently in July,” said WCC Director of Communication Mark Beach.
“The WCC would not be involved in national church decisions,” he added.
The World Council of Churches  is an ecumenical Christian organization aiming to promote Christian unity. It is consisted of 340 churches, of which 157 are members, representing over 550 million Christians in over 100 countries.
The WCC was founded on August 23, 1948. Its founding members include the Ecumenical Patriarchate of Constantinople, the Church of Greece and the Church of Cyprus.
It includes Orthodox as well as Protestant, Lutheran, Methodist, Baptist and Pentecostal churches. The Roman Catholic Church, although not a church-member, cooperates closely with the WCC.
The Avaton
For more than 1,000 years women have been banned from entering Mount Athos. Many Orthodox women have protested against the ban saying that it is their right to visit the monastery.  A European Parliament Resolution in 2003 criticized the ban as a violation of sexual equality and citizens’ religious freedom.
The response of Mount Athos Governor
The Civil Governor of Mount Athos, Aristos Kasmiroglou responded: “Mount Athos belongs to its residents and no one can enter without their permission, let alone change their rules,” pointing out that the avaton is not regulated by international conventions.