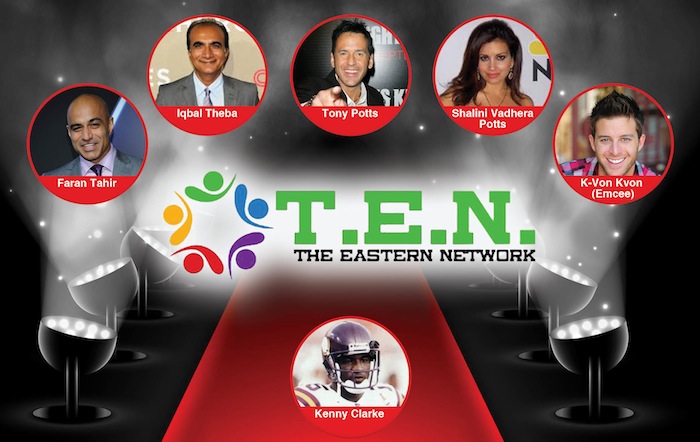 Professional athletes, celebrities from “Glee,” “Ironman,” “Access Hollywood,” a recent Miss India/Bollywood actress and more will walk the red carpet at a star-studded benefit celebrating the opening of The Eastern Network (T.E.N.), a new event planning agency that connects the affluent South Asian and Middle Eastern communities in Southern California, at Chakra of Beverly Hills, Saturday, Aug. 2, from 7 p.m. – 2 a.m.

“I realized that I had a talent for creating inviting environments that are interesting to celebrities and to hip, stylish people in the Asian and Middle Eastern communities of SoCal,” said T.E.N. co-founder Mona Shaikh.

“T.E.N. events set the standard for experiencing the best in food, entertainment, and intriguing people in these communities.”

The T.E.N. Red Carpet event will begin with an open bar and a red carpet entrance by the celebrity guests, featuring emcee and Persian comedian K-Von of MTV’s “Disaster Date,” and appearances by Iqbal Theba of “Glee,” Faran Tahir of “Ironman,” Kenny Clarke of the Minnesota Vikings, Pooja Batra, a former Miss India and Bollywood star, Tony Potts of NBC’s “Access Hollywood,” Shalini-Vadhera Potts, an international beauty guru, Rehan Jalali, a Hollywood health and fitness guru who is currently working with Ben Affleck to get him ready for “Batman,” and many more. A surprise musical performance by an Arab hip-hop artist, belly dancing, a houka bar, and cabanas will create an exotic environment that organically connects and entertains the affluent South Asian and Middle Eastern communities of SoCal.

Part of the proceeds from ticket sales will benefit the three children’s charities: Cry SoCal, helping underprivileged children in India; St. Jude Children’s Research Hospital, for treating and preventing terminally ill children in USA; and Islamic Relief to provide medical and disaster relief for children of the current Israel-Palestine conflict.

“All of our events will be accessible and exciting, filled with the entertainment and the atmosphere that brings communities together for fun, while benefiting good causes,” said T.E.N. co-founder Manal Hussain. “Cry SoCal, St. Jude Children’s Research Hospital, and IR USA all represent the very values that T.E.N. believes in, which is to bridge the gap between communities by coming together for vulnerable children not only in U.S., but also in India and Palestine.”

Tickets that include food from Chakra, an open bar, belly dancing, a live performance from an Arab hip hop artist and more start at $50, and are on sale now.

For more information, go to http://www.theeasternnetwork.com.