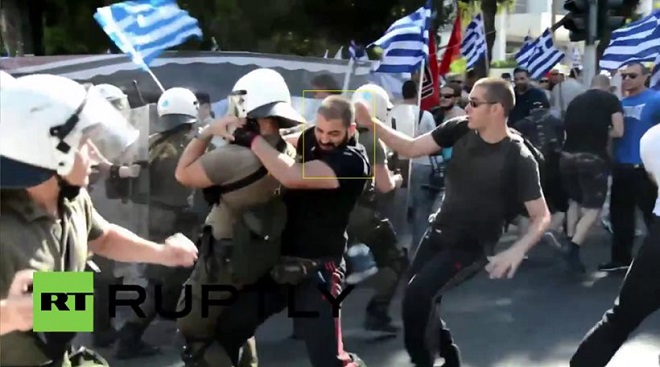 Alexandros Lyris, a Golden Dawn member who is also part of the political party’s youth front, was rewarded with a job position in the European Parliament in Brussels. Lyris is now the new advisor to Golden Dawn’s MEP Lambros Fountoulis.
Photos and videos from a recent Golden Dawn protest in front of the Court of Appeals in Athens, show Lyris grabbing a police officer in a headlock, although Golden Dawn says that he was defending himself.  The incident that took place on July 4 outside the Court of Appeals in Athens, when Nikos Michaloliakos, Golden Dawn’s leader was taken into custody. After the incident the Golden Dawn member disappeared in the crowd. (Watch the video below)
[youtube]IosIu8dOE28[/youtube]
The 28-year-old first appeared in the Greek political scene during the last national election and then again in the European Parliament elections that took place this May.
Greek authorities are in the process of identifying Lyris through footage of the incident, police sources noted.
MEP Fountoulis, said that his colleague was defending himself and that he is a highly-educated person he fully trusts.