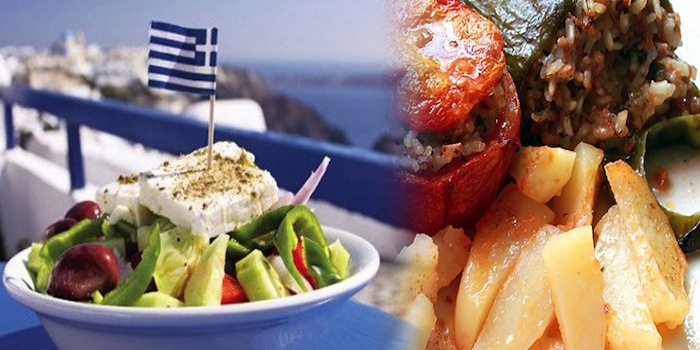 There are some Greek cuisine recipes that are strongly associated with summertime as they are quick, light and easy to make. These dishes are ideal for a meal in the yard, with view of the sea, accompanied with ouzo.
Stuffed Tomatoes and Peppers (Gemista): One of the most popular dishes in Greece, came from Asia Minor. The original recipe includes pine nuts and raisins while the Greek traditional filling often includes minced meat with rice.
Moussaka: Moussaka is considered one of the dishes most prefered in the summer. The origin of moussaka is not historically patterned as various forms are found in the Balkans, the Middle East, Central Europe, Turkey and Greece. The Greek version appeared in 1910 with the release of recipes by Nikolas Tselementes. The difference of the Greek recipe lies in the addition of the French bechamel on top.
Stuffed Eggplant Aubergine (Imam Baildi): This delicious dish based on aubergines stuffed with onions and garlic and bathed in olive oil got its name after an imam who tried it for the first time, fainted – “baildi” in Turkish means to faint. The recipe came from Turkey and was adopted in the Greek, Albanian and Bulgarian cuisine.
Mixed Vegetabes (Briam): Briam, Turlu, ratatouille. Many names, one result.  This delicious dish is made of boiled or baked vegetables and tomato sauce. Some believe that it appeared in the period 1720-1861 in Nice, southern France and from there arrived in the Mediterranean cuisine, while others argue that the French copied the Catalan Samfaina, a dish that accompanies fish.
Dakos: This traditional recipe from the island of Crete is very quick and simple. All you need is Cretan barley rusks soaked in olive oil, grated tomatoes and feta cheese. Dakos doesn’t require cooking.
Greek Salad (Choriatiki Salata): The Greek salad is the absolute summer dish. It is Greece’s trademark that accompanies almost every dish. It is said that it first appeared between 1800 and 1900 by a Greek migrant in America. The Greek salad entered Greek cuisine in the beginning of the 20th century.
Tzatziki: The famous tzatziki is made from yogurt, garlic and grated cucumber. It has its roots in ancient Greece where it was called “Myttiko.” It passed into the Byzantine cuisine and it was later adopted by the Turks who call it “cacik“.
Souvlaki: The famous Greek souvlaki has its roots in ancient Greece where it was called kandavlos. It is skewered pieces of pork and it can be served wrapped in pita bread with tomato, onion and tzataziki. In this form it first appeared in the 40s and 50s in areas inhabited by immigrants such as Drapetsona, Nikaia and Korydallos.