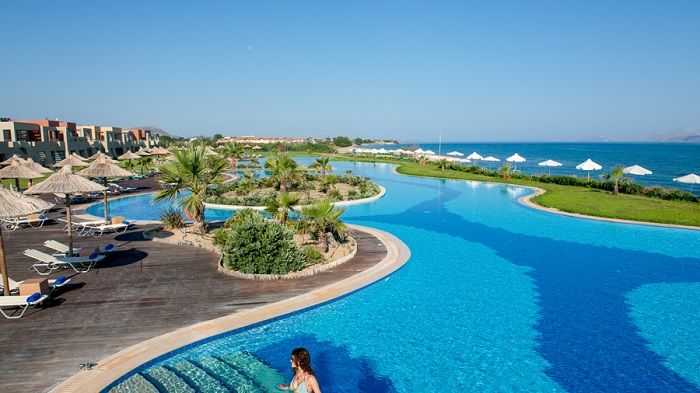 According to a survey by the Research Institute for Tourism of the Hellenic Chamber of Hotels, the number of five-star hotel rooms in Greece has increased by 31.4% in a span of four years, from 2009 to 2013.
The survey shows an overall increase in Greece’s luxury accommodation capacity. Hotels and rooms are constantly being upgraded, with four-star hotel rooms increasing by 4.2%, and three-star hotel rooms increasing by 6.5%. Meanwhile, the number of rooms in two and one-star hotel rooms has declined by 1.5% and 2.8% respectively.
In 2013, there were 9,677 legally operating hotels in Greece. The total number of hotel rooms rose to 401,332 and the total of beds reached 773,445. One in seven of these rooms (57,878 rooms in 361 units with 117,555 beds) were at five-star hotels. However, two-star hotels are still dominant with 4,203 units, 119,157 rooms and 223,932 beds.
Furthermore, according to the survey, the percentage of hotels that remain open throughout the year also show a slight increase reaching 46.4% in 2013, compared to 44% in 2009. Mostly three-star hotels operate all year-round, with a remarkable 55%, just four points ahead of four-star hotels on 51%.
Finally, apart from upgrading rooms, hotel owners are also upgrading the services provided, especially in regards to Internet access.