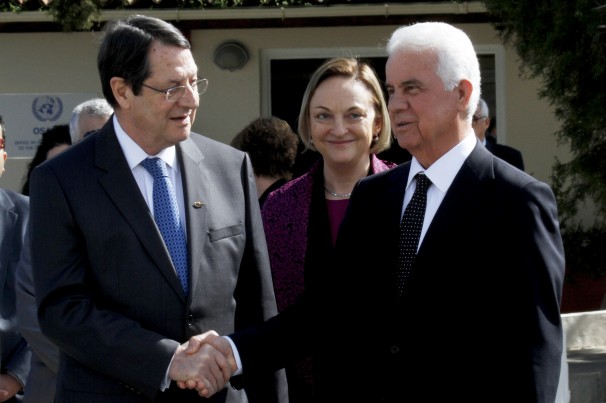 Peace talks on the Cyprus problem stopped yesterday for the summer, with the two sides failing to agree on the convergences achieved so far, the methodology to be followed in the next phase of the talks and on a single, big or small, confidence-building measure (CBM).
During a four-hour meeting at the UN-controlled Nicosia airport, the Greek Cypriot and Turkish Cypriot leaders agreed on their next meeting, on September 2.
For the first time yesterday, both sides submitted detailed proposals on the Cyprus problem, even if they failed to reach an agreement on the content.
The Greek Cypriots submitted a total of 17 documents, presenting their positions on the various aspects of a future settlement, while the Turkish Cypriots tabled 15, focusing on the sensitive issue of guarantees and territory, although no map was submitted.
The island of Cyprus has been divided into the Turkish Cypriot north and Greek Cypriot south after the Turkish invasion in 1974. Since then, many efforts have been made by the UN to solve the dispute but without any effective outcome.
According to a UN statement, Nicos Anastasiades and Dervis Eroglu will meet again on September 2. Negotiators will continue discussions on methodology and CBMs before the leaders’ meeting. It is believed Andreas Mavroyiannis and Kudret Ozersay will meet again on August 26.
On Thursday, before yesterday’s meeting, the two leaders visited the anthropological laboratory of the Committee on Missing Persons in Cyprus (CMP).